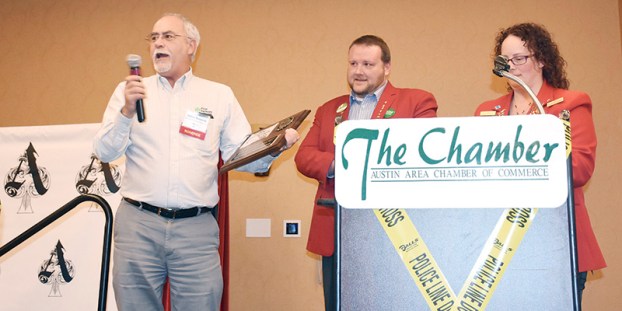 The Austin Area Chamber of Commerce announced the winners of the Large and Small Business of the Year for 2018 during its Winter Banquet Thursday evening.

Several businesses were nominated as possible contenders based on their operations as well as their involvement in the community. Winners were chosen based on scores awarded by Chamber Ambassadors, who met with nominees and toured their businesses.

Fourteen nominees were considered for the 2018 Business of the year.

“All 14 nominees are really outstanding businesses in the Austin community,” said Austin Area Chamber of Commerce President Elaine Hansen. “We’re very fortunate to have them here. They do a lot of great work in the community; they are good corporate partners. We’re excited to be able to recognize all of the great businesses and we’re grateful for so many of our members coming forward and being part of this event.”

The Chamber also named the Project of the Year, awarded to a business that opened or grew in 2018, as well as the Ambassador and Volunteer of the Year. 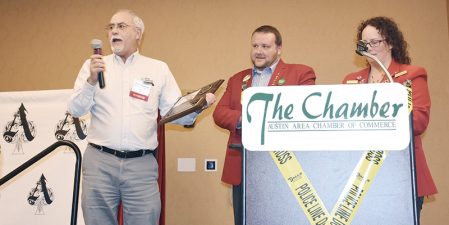 First Farmers & Merchants Bank, located at 128 Main St. S, was named the Large Business of the Year for its staff’s involvement in multiple community and fundraising events.

While Nuckolls called the award “a big surprise,” he credited the staff for making it possible.

“It definitely reflects the bank’s commitment to the community,” he said. “It’s the staff that won the award. If it weren’t for them, we would just be another place to stop. Customer service and community involvement, that’s our two big things.” 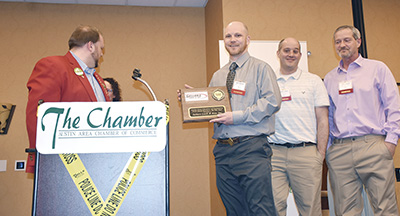 Sellers Lock & Key, located at 303 Fifth Place NW, was awarded the title of Small Business of the Year for its donations to multiple groups, including the American Legion and the Mower County Humane Society.

“It’s pretty awesome,” said Jeff Sellers, President of Sellers Lock & Key. “We’ve worked very hard for many years. We were absolutely surprised. We had incredible businesses nominated this year and I never thought in a million years we would be named with that kind of competition.”

Sellers credited his two other employees for helping earn the award.

“My employees are excellent,” he said. “They’re brothers; they’re family. None of this would be possible without them.” 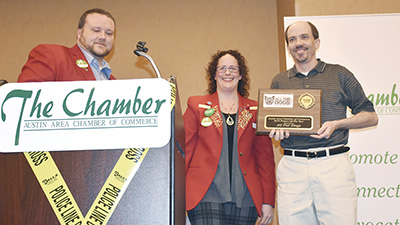 All Fur Dogs was named Project of the Year. Jana Norman/jana.norman@austindailyherald.com

Project of the Year: All Fur Dogs

All Fur Dogs, located at 503 27th Ave. NW, was honored as the 2018 Project of the Year. In order to open, owner Andy Gray said they had to build the facility from the ground up, which was a major investment.

“We saw a need in the community, identified it and figured out how to fix,” he said.

“At the end of the day, we work with dogs, and I use the term work loosely because we spend our day hanging out and playing with dogs,” he said. “When you love what you do, its not work. I’ve had dogs my whole life and it’s really cool that everyday we add to our All Fur Dogs family. It’s a really humbling, really cool experience for all of us.”

Ambassador of the Year: Danielle Morem

“Its wonderful to see such a young professional make such an impact in the community,” Hansen said of Morem.

Volunteer of the Year: Jana Norman 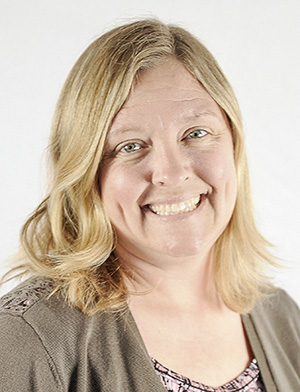 Austin Daily Herald Publisher Jana Norman was named the 2018 Volunteer of the Year.

“It is an honor to win this award,” Norman said. “The Austin Chamber does a lot for our business community and volunteering is just a part of what we can do to make Austin even better.”

Norman is a past president of the Austin Area Chamber of Commerce.

For those who had to cancel appointments to their doctor because of snow storms, Mayo Clinic announced that it planned... read more