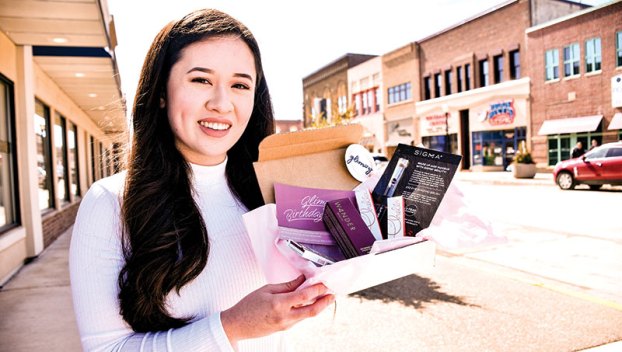 To say that Valentina Truong-Ferreira is a busy woman is an understatement. While she’s not juggling her intense 22-credit hour course load at the Carlson School of Management at the University of Minnesota in the honors program, the Austin native is poised to start her own start-up company that nailed its first major brand partnership.

Truong-Ferreira always held a deep love for makeup, having played around with cosmetics since she was a freshman at Austin High School. She quickly became a go-to person for her friends on what brands to use and for advice on makeup application, such as creating a cut-crease with eyeshadow or using highlight powder to illuminate the inner corners of her eyes.

While a student in Austin, the young business leader found joy in entrepreneurship. She was always coming up with ideas on her next business, whether it was selling T-shirts or doing makeup and hair-feather extensions for fellow students in the bathroom.

“I was always into makeup and beauty,” Truong-Ferreira said. “I always had that entrepreneurial ‘itch.’ To be a part of the industry was a dream of mine.”

Now a senior at the University of Minnesota, Truong-Ferreira is on the verge of graduating with honors from the Carlson School of Management. This is all while running her beauty subscription-box company called Glimzy, which curates full-sized beauty products and accessories. 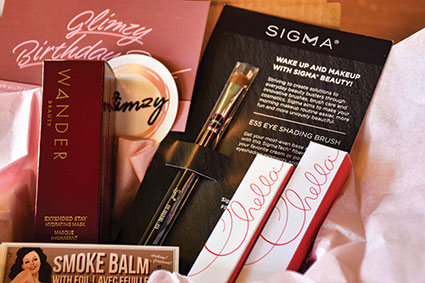 Full-size makeup products can be found in a box, such as a Sigma brush and Wander Beauty hydrating mask. The product value in a box amounts to $114 for March, and is available for $25 per monthly subscription.

The first Glimzy box holds beauty products that have a total value of $114, but subscribers will be able to get the box for $25 per month that’s shipped to them and, with a code, they could receive an additional 10 percent off their total subscription for March.

Some things that can be found inside this month’s box: a Sigma makeup brush, Wander Beauty hydrating mask, a sticker with the Glimzy logo, eyebrow gel and a highlight pen, and a three-eyeshadow palette with neutral colors. Even though it’s the first month that Truong-Ferreira launched Glimzy, she received 80 orders for her boxes, some from direct sales and many from e-commerce.

Using a simple website, customers can order their first subscription box. While these boxes are getting prepped to be shipped out, Truong-Ferreira is already contacting other brands to secure products for next month’s package. A risky endeavor, but one that the business owner loves.

“I like to call my own shots,” she said of her experience. “I’m very lucky.”

The glimmer of hope

Glimzy came as a product of Truong-Ferreira’s experiences as a consumer. She subscribed to a similar service for beauty products, but was unsatisfied with the process and handling of her subscription box online. After seeing other customers struggling with similar issues, the idea for Glimzy sparked.

“Although I was frustrated, I realized that maybe I could do better,” Truong-Ferreira said. “You gather insights and you are solving another problem for another person. You network like crazy.”

Catering her business toward college students, Truong-Ferreira made sure to do her homework on what the demand was for certain brands as well as whether products were cruelty-free or vegan. She tested certain brands herself, heavily vetting out products that she wouldn’t use.

Citing inspiration from her favorite beauty gurus such as Jeffree Star, James Charles and Jaclyn Hill, Truong-Ferreira began diving into the beauty industry, which helped shape her research. Throughout her process of curating beauty products for Glimzy, Truong-Ferreira felt immense pressure to juggle her honors coursework at the University of Minnesota — where she maintains a 3.74 grade point average — while running her start-up company.

It’s definitely not easy, but it was the hard work and spirit that motivated Truong-Ferreira to set her sights on the future of her subscription box business, and she kept with it.

“I keep telling myself it’s a marathon and not a sprint,” she said. “It’s hard, and some days I ask myself why am I doing this. But, I’m willing to make the sacrifice and I prioritize. I find ways to have fun while working on my honors thesis. I spend time with friends. It’s about balance.” 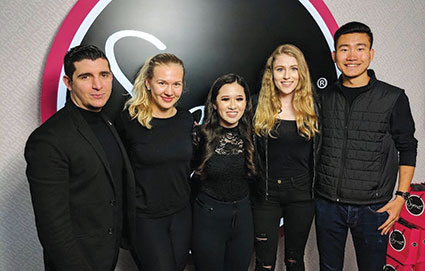 Middle: Valentina Truong-Ferreira, 20, an Austin High School class of 2016 alumna, hosted the launch of her makeup subscription box, Glimzy, at the Sigma store in the Mall of America last Thursday. Photo provided

Networking with major brands and taking risks was something that Truong-Ferreira knew was part of entrepreneurship. She dealt with larger makeup brands not taking her seriously as a legitimate business since she and her team of six classmates weren’t established yet. She also fought her own anxiety of approaching major brands to collaborate with her.

“It was definitely a long process,” she recalled. “The way we were positioned, they didn’t take us seriously. It takes a long time to establish that credibility. I also am afraid of getting told ‘no.’ That was something I had to get over. The key with partnerships is to maintain that level of trust and transparency with partnerships. Once you break that, it’s really hard to fix it.”

To bolster sales, she sent sample subscription boxes to micro-influencers on social media to garner a higher reputation for Glimzy. It was about building her company from the ground up, and the hard work was worth it.

After multiple rejections from more brands, Truong-Ferreira got a significant break after receiving a brand partnership with Sigma Beauty.

The co-founder, Simone Xavier, was a University of Minnesota alumna, and established a relationship with the young entrepreneur and invested into the start-up with Sigma brushes to be a product inside the Glimzy box.

“We talked over the phone and (Simone) really liked us,” Truong-Ferreira explained with a smile. “She really believed in us, and what we were doing. She’s super nice and caring. I never would have thought this was possible, but here I am.”

It was hard to believe that almost two years ago, Truong-Ferreira walked into the Sigma Beauty retailer at the Mall of America as just a consumer and attending an event held by a beauty influencer. Never in a million years did Truong-Ferreira think she would host a launch of Glimzy at the very same store just last week.

Now drawing close to graduation, Truong-Ferreira feels hopeful for the future and plans to continue operating Glimzy as her business.

“The name Glimzy represents ‘a glimmer of hope,’” she said. “It represents optimism, and a belief in my vision of hard work to be in the industry too. It really is a dream come true.”

Go to www.glimzy.co and sign up for the March subscription box. Use the code WELCOME10 for 10 percent off the first Glimzy box.

By Tom Fritz Ellis Middle School VEX Robotics Coach What makes a successful student in the 21st century?  Is it... read more