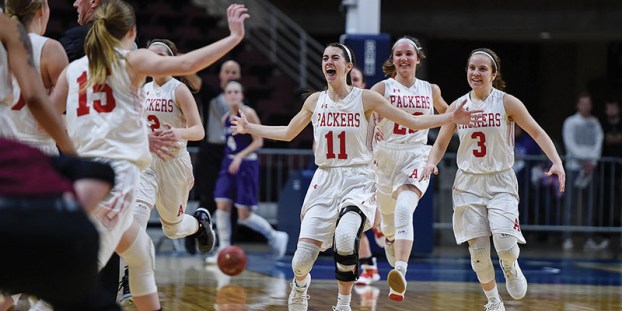 ROCHESTER – The No. 4 -seeded Austin girls basketball team used a giant chip on its shoulder as motivation to pull off a massive upset in the Section 1AAA Tournament semifinals.

The Packers overcame a slow start to knock off top-seeded and top-ranked Red Wing by a score of 73-70 in Mayo Civic Center Saturday. 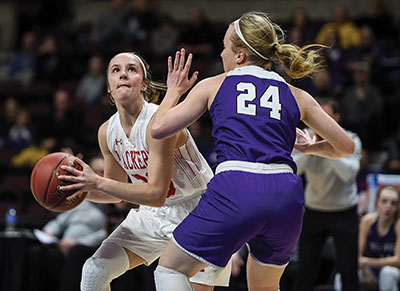 There were seven lead changes and one tie in the final eight minutes as the Packers finally took the lead for good when Hope Dudycha sank two free throws to put Austin up 67-66 with 1:04 left in the game, after Red Wing’s Lindsay Rep hit a go-ahead three-pointer.

Austin iced the game at the free throw line as Colie Justice, who finished with 18 points and eight rebounds, knocked down four straight free throws in the final seconds. 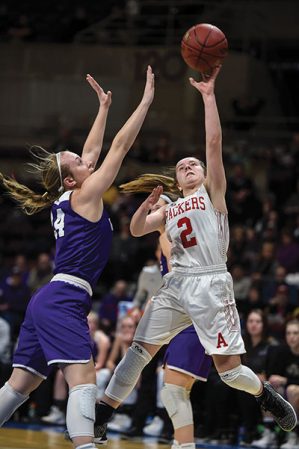 Austin’s Hope Dudycha puts a shot up in the first half  Saturday against Red Wing during the Section 1AAA semifinals at Rochester’s Mayo Civic Center. Eric Johnson/photodesk@austindailyherald.com

“That was the best game we’ve played all year and I can’t say it came out of nowhere because there was an internal fire burning because of what Red Wing did to us (in seeding voting),” Austin head coach Eric Zoske said. “When it happened, we had a team full of angry girls because we didn’t deserve the four seed.”

The Dudycha twins, who are both freshmen, grew up fast on the big stage against the Wingers (24-3 overall), who had swept the regular season series against Austin. Hope finished with 20 points, knocking down a big three-pointer to put the Packers up 61-60 with 5:34 left. Emma tallied 14 points.

“We had four underclassmen on the court down the stretch and the poise those girls had is truly amazing,” Zoske said. “They hit clutch free throws down the stretch. Those girls are ballers and they are gamers. They showed up.”

Austin (19-8 overall) trailed by as many as 11 points early on, but Emma gave the Packers a spark off the bench on the offensive end. Austin went into halftime tied at 33-33 and neither team led by more than five in the second half. 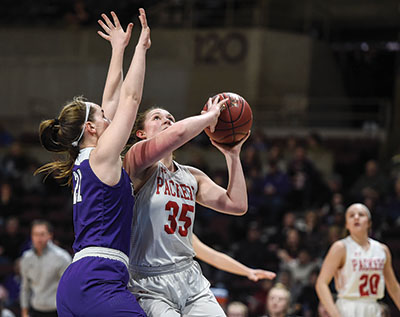 Austin’s Kyra Walters pushes to the hoop against Red Wing’s Hannah Rodgers in the first half Saturday during the Section 1AAA semifinals at Rochester’s Mayo Civic Center. Eric Johnson/photodesk@austindailyherald.com

“It was everyone in this win,” Justice said. “It was the bench and the community and it was a good team win.”

The Packers haven’t won on the Civic Center floor since 2008, which is the last year the team went to the state tournament. Hope said the big court can be intimidating, but the team was able to relax and play its style.

“We had to come out and play like it was any other game,” Hope said.

Kiwi VanZant had six points, 10 rebounds and three assists for Austin, which will play Northfield in the Section 1AAA title game in Mayo Civic Center at 6 p.m. Friday.

New dates for Learn to Skate

Do you have a child age 3 to 10 that wants to learn how to skate. We are offering more... read more