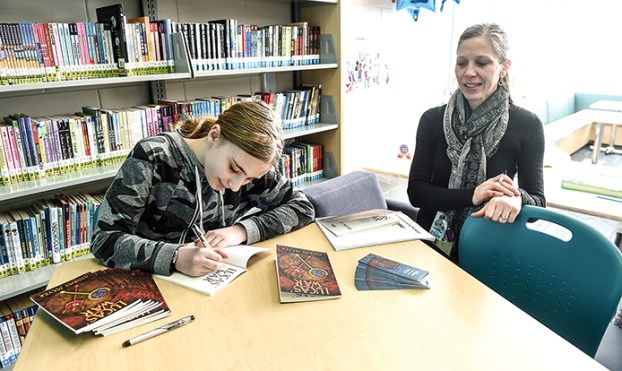 Inside IJ Holton Intermediate School’s library, there were cupcakes and balloons. It was Haylie Meyer’s birthday, but that wasn’t the only thing that was being celebrated Thursday morning.

The 12-year-old sixth grader recently wrote and published her first book called “Lucas’ War,” that’s now available on Amazon and Barnes and Noble websites. Sitting at a corner table with a small stack of her chapter books, Meyer started signing copies of her first published work for friends, teachers and staff.

Rather than publish her book under her legal name, Meyer decided to author the book using a family nickname given by her great grandfather.

For those wondering, the name’s Stormy Meyer.

“I always wanted to publish a book,” she said while signing copies of her book for her friends. “I definitely want to continue writing for sure.” 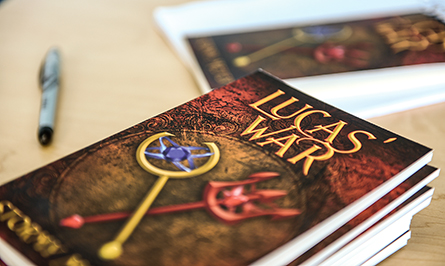 A short-chapter book, “Lucas’ War” takes on a variety of influences including the Percy Jackson young adult novels written by Rick Riordan, and incorporates fantasy into the plot. The main character, Lucas, is forced to become a spy or lose his life to the evil God Katastrofi. According to the book’s synopsis, Lucas is jailed as a traitor and shunned by his friends. When things seemed hopeless, Lucas has a huge task to help restore the balance between good and evil.

“I gained inspiration from different authors,” Meyer said. “I put them all together into one big story. Lucas is resilient. A lot of my other stories I’ve written using characters from other stories. This book is the first one I wrote with my own characters and it’s original.”

After taking a little over a year to complete the book, Meyer also had to take some time having the early manuscript edited by her former teacher, Sarah Shultz and then sending the work to a publishing company. She then fundraised to have enough money to publish her book, whichare now available at IJ Holton’s library. 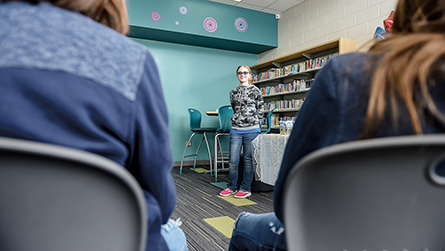 Dedicating her book to her former teacher Sarah Shultz, a continuous improvement specialist and dean of students, Meyer acknowledged that Shultz had encouraged her to write stories and even took some time to edit chapters of the story’s draft.

“She got me writing, and supported me,” Meyer said to Shultz during the book signing. “I really look up to you.”

Hearing about her student’s endeavor on getting a book published, Shultz said she wasn’t at all surprised that Meyer would become an author at such a young age. By working closely with Meyer, Shultz discovered Meyer’s talents for storytelling and continuously encourage her to pursue writing.

“This is really exciting,” Shultz said of her former student. “Haylie is a prolific writer and she loves to read. Students can do anything that they set their minds to. I was truly touched by her, and I just thought ‘My God, look at what she did.’ I’m so proud of her.”

One of the biggest tips that Meyer could give to anyone looking to publish a book would be to work with a company that they personally liked.

“Make sure your story is something that you’re proud of,” Meyer added.

For those close to Meyer, there was no surprise when it came to her writing stories. Usually, the biggest support for Meyer came from her close circle of friends and fellow sixth grade classmates Anita Rao, Peytyn Johnson, Lilly Loverink and Ava Cafourek. The girls all shared similar interests in books written by Riordan, and would sometimes imagine themselves in a fantasy world while playing together.

“Writing is a part of her,” Rao said of Meyer. “I stayed up until 2 a.m. reading ‘Lucas’ War,’ and so I was super excited that it was going to come out. The story’s short, but it’s really good. I wish it was longer so that it didn’t have to end.”

One of Meyer’s best friends, Johnson, also writes stories of her own. The two would often write together, and come up with ideas for their respective stories.

“Every time she posts ‘Lucas’ War’ we have to read it,” Johnson said. “I knew she started writing a book, but I was surprised that she published a book at a young age. It’s awesome.”

Loverink shared that when she transferred schools, she didn’t have a lot of friends during her first year at IJ Holton. However, when she met Meyer, she was accepted into the group and discovered about Meyer’s talent for storytelling, and is now one of the first to own a copy of “Lucas’ War.”

“She sometimes writes about us in her stories and about all the adventures we go on together,” Loverink said. “She has a lot of imagination.”

Hy-Vee program gets kids on track for health

Elementary students in Austin took a step toward fitness at the Packer Dome Thursday morning, thanks to a Hy-Vee initiative... read more