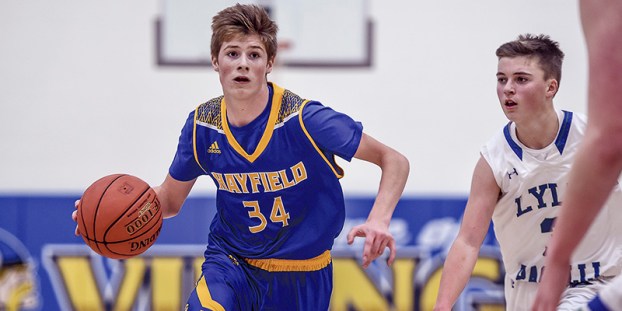 Hayfield’s Ethan Slaathaug drives in the lane against Lyle-Pacelli in the first half Thursday night during the opening round of the Section 1A Tournament in Hayfield. Eric Johnson/photodesk@austindailyherald.com

HAYFIELD —The No. 5 seeded Hayfield boys basketball team was resilient in its ball movement as it was able to knock off No. 13 seeded Lyle-Pacelli 73-55 in a Section 1A Tournament opener in Hayfield Thursday.

While LP was focused on stopping Hayfield senior Mason Tapp, who had all 11 of his points in the second half, the Vikings (23-4 overall) made sure other players had a big impact. Sophomore Ethan Slaathaug, who had 19 points, three assists and three rebounds, helped break the game open when he when he caught fire from the arc in the second half — hitting four of his five threes in that frame. 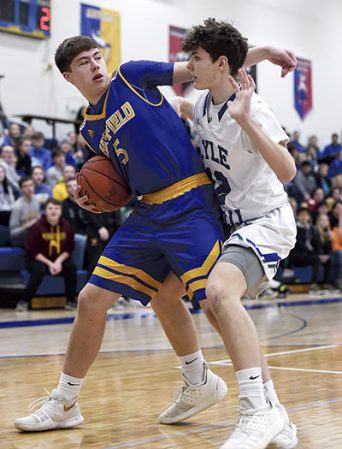 “Our defense turned into offense and we hit shots,” Slaathaug said. “I’m really confident. In warm-ups if I’m hitting shot, I’ll come out in the game and start hitting.”

Patrick Towey was able to create offense for the Vikings by driving and creating chaos. He finished with 14 points, three assists and five rebounds and eighth grader Isaac Matti added eight points and six assists. Towey said the Vikings were inspired by the San Antonio Spurs.

“Everyone knows the Spurs by their ball movement,” Towey said. “If you move the ball, eventually that’s going to open it up for someone to drive and when you drive the defense will come to you so you can kick it for lay-ups and three-pointers.”

Hayfield led 30-22 after Luke Dudycha, who had 18 points and nine rebounds, scored late in the first half, but LP scored the next seven points as Zach Bollingberg had a pair of strong finishes to make a one-point game at halftime. Bollingberg finished with 20 points.

Hayfield head coach Chris Pack said he was confident with his team’s ability to turn it on the second half, even with LP focusing on Tapp. 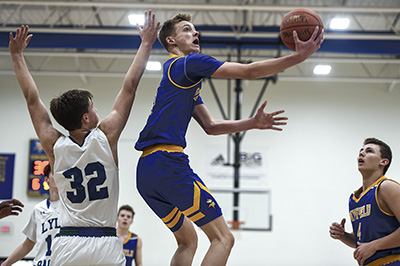 Hayfield’s Mason Tapp floats through the lane with a shot attempt against Lyle-Pacelli in Section 1A Tournament play Thursday night in Hayfield. Eric Johnson/photodesk@austindailyherald.com

“With them playing a box and one and taking Mason out of the game, we knew we had guys that could make shots,” Pack said. “I thought we did well in the first half to get a nine point lead, but we hit a little lull and they had some momentum. We knew we were going to get good shots if they played some junk defense like that.”

Hayfield will take on No. 5 seeded Blooming Prairie in the Section 1A Quarterfinals in Mayo Civic Center in Rochester at 7:30 p.m. Tuesday.

“It’ll come down to defense and rebounding and I”m confident that our guys will be up for the challenge,” Pack said. 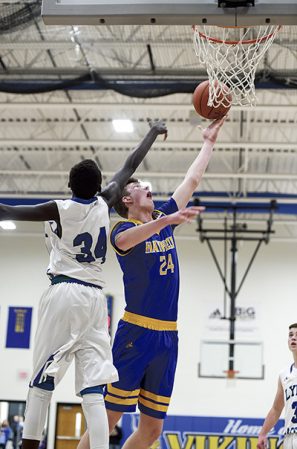 Hayfield’s Luke Dudycha with a lay-up against Lyle-Pacelli’s Buay-Koak in the first half of their Section 1A Tournament game Thursday in Hayfield. Eric Johnson/photodesk@austindailyherald.com 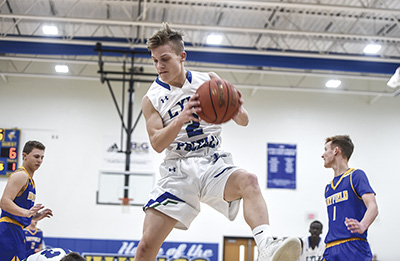 Austin junior Riley Norton advanced to the finals in diving at the Minnesota Class A State Diving Preliminaries at the... read more