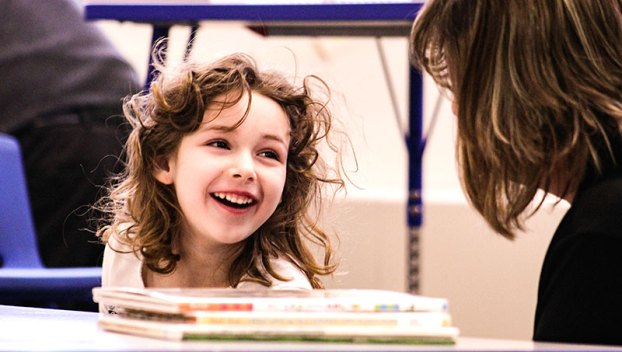 Reading from a book of nursery rhymes, Debbie Blomquist, a Hormel Foods employee, spent Wednesday morning with Savannah Baumgartner, a Woodson Kindergarten Center student. The two giggled over the illustrations in the book, and took time to talk about what they read together.

Wednesday was the last day for Hormel Foods employees to read with a Woodson Kindergarten Center student as part of the Read to Inspire Program that has been hosted at the school for the last six years.

Each student was paired with a mentor, who would come to visit once a week from November through February to read to them. From these frequent visits, the students begin to form a bond with their mentor and learn social skills such as reading with a friend. Around 46 mentors participated in the program. 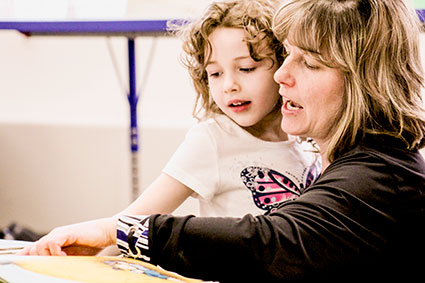 Debbie Blomquist, a Hormel Foods employee, reads to Savannah Baumgartner, a Woodson Kindergarten Center student, as part of the Read to Inspire program. Each year, Hormel employees would mentor a student and read to them once a week from November to February as a way to spark a love of reading and building their social skills. Hannah Yang/hannah.yang@austindailyherald.com

Woodson Kindergarten Center teacher Ashley Denisen, who had been involved in the Reading to Inspire program, shared that by having the kindergarten students paired with a mentor, they learn valuable social skills such as sharing and active listening.

“It’s an example of how they further develop a love for reading and how to make a friend,” Denisen said. “They see that an adult is giving them undivided attention. We’re hoping to continue this program in the future, and it’s a great way to connect the students to the community.”

For mentors like Blomquist, these students grew accustomed to having their friend stop by once a week during the last few months. When a mentor is unable to come, usually substitutes fill in to spend time with the student, but absence would be noticed. One student, even cried because their mentor could not come, according to Principal Jill Rollie. 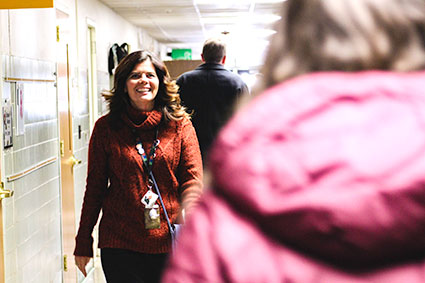 Woodson Kindergarten Center Principal Jill Rollie greets Hormel Foods employees who are participating in the Reading to Inspire program. Volunteers come in during their lunch break once a week from November to February and read to a student they mentor. Hannah Yang/hannah.yang@austindailyherald.com

From this program, kindergarten students are learning how to embrace literature by sharing some of their favorite books with an adult. Along with a smile or two, both the kindergartner and the Hormel employees leave the school feeling a little bit brighter.

“It’s totally a bright spot in the kids’ week for their buddy to come visit,” Rollie said. “They really do build a strong connection with their mentor. We’ve had mentors tell us that it’s equally as a bright spot for them. It’s amazing to have the community supporting our kiddos like that.”