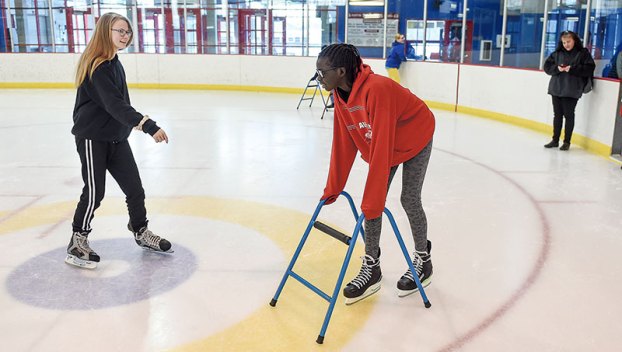 Just as the early rays of sunlight broke through the sky, Ellis Middle School students were already gliding Wednesday morning.

Inside Packer Arena, Peer Power Partners (PPP) were lacing up their skates and hitting the ice rink while skating to music from The Greatest Showman blaring in the background.

Some students were more agile and zipping past their peers, some who may have never skated before. Others fell down on the ice with a surprised laugh before getting back on their feet.

“I joined because I want to learn things that I’ve never done before,” said Hector Garcia-Lopez, a seventh grader and PPP member. “It’s alright, and a little tricky. But, it’s alright. It’s awesome to learn new things.” 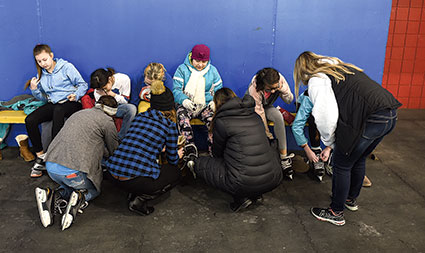 Staff help first-time skaters get their skates on.

PPP pairs youth with special needs and same-aged peers to promote friendships, understanding and advocacy. It is a collaboration among the Parenting Resource Center, Austin Public Schools and Vision 2020 Community Pride and Spirit and is funded by The Hormel Foundation, Austin Public Education Foundation and private donations.

Kendra Maxfield, an Ellis Middle School English Language teacher and PPP team leader, said the purpose of the morning’s skate was to bring these students together and bond over a shared learning experience despite differences.

In this case, that would be ice skating. Between 90 to 100 students are members of the PPP at Ellis alone, and students have chances to become members at IJ Holton Intermediate School and at Austin High School also. 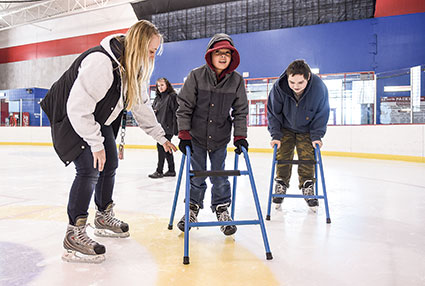 “We wanted to unify them and have them meet and mingle,” Maxfield said. “We were wondering how many students never skated before, and this was a way to have our mainstream and special education students to bond over approaching something new the same way.”

For some, zipping around the ice was a way to make new friends when other situations prove to be a challenge. Grant Marrell, a seventh grade student and PPP member, said that the group helped him establish new relationships with his classmates and that he saw how much the time spent together benefitted him.

“It was really helpful for me,” Marrell said. “Before, I went to another school. It’s fun that some people who don’t know how to skate can just bond and have fun. PPP is helpful and you can make friends with other people.”

An online petition circulated around Austin High School is calling for administrators to take the allegations of harassment and racism... read more