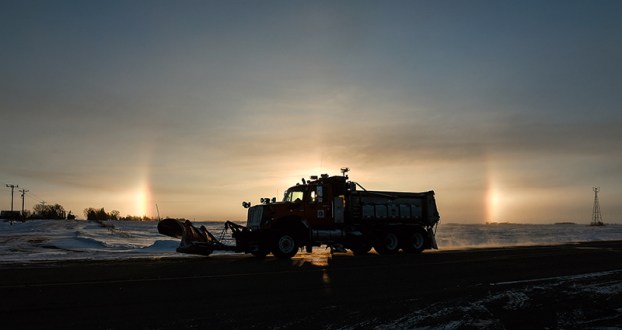 A MnDot truck heads north on Highway 56 towards Brownsdale and his hugged by sundogs. Eric Johnson/photodesk@austindailyherald.com

Our opinion: Those who work in blizzards are heroes

It should go without saying that the blizzard the area suffered this weekend, and still suffers from, impacted us all on a level not seen for quite some time.

It was a punch in the gut as we all struggled to figure out what to do with the newly-fallen snow and what we will do with the snow we undoubtedly will see in the future.

As we cope with the difficulties of getting around and grumble about the snow, it’s more than worth it to extend our gratitude to those who still had to go out in those kind of conditions to do their jobs.

Those include law enforcement, fire departments, EMT and ambulance crews of all levels, tow-truck drivers and above all else those plow drivers who went before them to get things up and going again.

As of 9 a.m. Tuesday morning, Interstate 35 was open save for a stretch between Owatonna and Albert Lea and Interstate 90 was open as well. This was after both were closed Sunday into Monday.

The pictures, shared on social media, show the daunting work these crews had to undertake in order to get things rolling again and demonstrate the conditions they were often plowing in.

Of course “open” doesn’t mean safe as all these roads were all still listed as completely or partially covered by MnDot 511 on Tuesday, with dangerous ice compounding things. But the amount of work these plow drivers have put in just to get to this point has been astounding. The long hours of clearing roads and cutting through snow drifts is jaw-dropping and while still dangerous, these cleared roads allow us to breath a little and continue on with our own lives.

Even though they are in much bigger vehicles, their work is dangerous work and so we should all extend our heartfelt thanks for the job they’ve done and all those who risked their lives so that we can continue on with ours.

Another ceasefire: Can the US and China end their trade war?