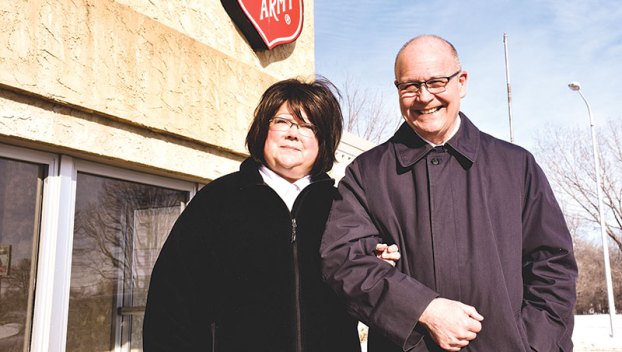 Maj. Jeff and Cindy Strickler are the new leaders for the Salvation Army in Austin. The two have spent more than two decades in the Twin Cities serving the nonprofit, and now have settled down in Austin earlier this month. Hannah Yang/hannah.yang@austindailyherald.com

It was a whirlwind, the last couple weeks, but Majs. Jeff and Cindy Strickler are already embracing their new roles as leaders for the Salvation Army in Austin.

After spending the last 21 years in the Twin Cities Salvation Army, the Stricklers were assigned to their new post at the Austin Salvation Army, having started earlier this month. The two have served a wide variety of communities in the Midwest, from Illinois to Iowa.

Now, the couple looks to get right to work in serving Austin, and catering to the needs of people who use the Salvation Army for its wide variety of services.

“We’re doing God’s work to serve people,” Jeff said. “Being a good follower of Christ means being a leader with a servant’s heart.”

Former Austin Salvation Capt. David and Laura Amick shared their enthusiasm for having the Stricklers succeed them in leadership, noting their confidence that the Salvation Army in Austin would be “blessed” from the majors’ experience and community service. The Amicks also viewed the Stricklers as their personal mentors, who installed them as officers about eight years ago.

“The Stricklers are great officers,” Laura said regarding the new majors. “Austin is in for a great blessing.” 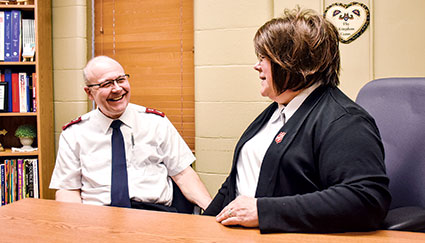 Majs. Jeff and Cindy Strickler reminisce about their past career with the Salvation Army inside their office in Austin. The two are now leading the nonprofit in town.
Hannah Yang/hannah.yang@austindailyherald.com

Not their plan, but God’s plan

A life in the Salvation Army was far from what Jeff would’ve imagined for himself years ago. He didn’t have a strong connection to his faith back in his early years, aside from his grandmother having “really believed in the Bible.” However, during his college years studying psychology, Jeff felt he had “heard God’s voice.” He had struggled personally with drugs and alcohol and had wanted to change his life completely, turning to Christianity. Not knowing where to start, he stumbled across a magazine that led Jeff to the Salvation Army.

“After college, I became a follower of Christ,” he said. “I was looking to join the Evangelical church, and saw the magazine ‘War Cry’ and inside was information about the Salvation Army church and then I became a member.”

This trajectory was far from what Cindy had experienced, who had grown up in the Salvation Army and never knew life without the church. She crossed paths with Jeff during a Salvation Army camp in Illinois while she was an officer and didn’t really think too much about him.

“My twin sister had talked about this young man who just became a church member and applied to go to seminary, and wanted to introduce me,” Cindy said. “We met that weekend, and that was it. We said goodbye.”

It wasn’t until the prodding of Cindy’s mother to have her daughter send a Hallmark card to Jeff through the mail about his seminary plans. Through the letter exchanges, the two eventually started dating. That was Labor Day weekend in 1982. The following year on the same weekend, the Stricklers married.

For decades, their relationship proved to be a strong partnership in how the couple leads the Salvation Army. Jeff speaks of Cindy as someone who is strong in programming and special event planning, while Cindy describes her husband as someone who is more business and administration-oriented.

“We trust in the Lord who is directing our paths,” Cindy said. “Now we’re on this wild, wonderful journey together.”

What makes a good leader is someone who is not afraid to serve others and to serve others with love and compassion, regardless of who they are, Cindy said. While serving in the Salvation Army, the opportunity to show what God’s love is starts with loving others.

“This is spiritual work,” she said. “You cannot say this is secular work, and you cannot divide them from each other. It’s all spiritual and you’re ministering to the people God created. You have to be close to the Lord, or you won’t love people. You better love people, or you’ll be miserable. People are your job, and unless you’ve got a loving attitude of wanting to serve him, then this work doesn’t honor God.” 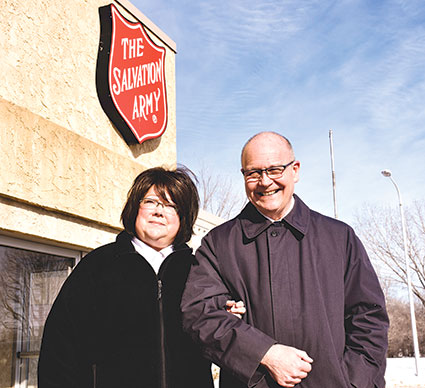 Maj. Jeff and Cindy Strickler are the new leaders for the Salvation Army in Austin. The two have spent more than two decades in the Twin Cities serving the nonprofit, and now have settled down in Austin earlier this month.
Hannah Yang/hannah.yang@austindailyherald.com

What’s ahead for the Salvation Army

Looking toward what’s ahead for Austin’s Salvation Army, the Stricklers plan to build upon the organization that exists in the community at its present state.

There will come a time when the advisory board wlll need to look at major maintenance work in the utilities within the current building, according to Jeff. There may also be further conversations about possibly finding another building in which the Salvation Army and its thrift store will operate.

However, the Stricklers plan on just letting God determine their course, and they’ll do the rest.

“We love Austin, and the people,” Jeff said. “We’re hoping to build those relationships and helping others. There’s just not enough love in this world. This is what we love most.”