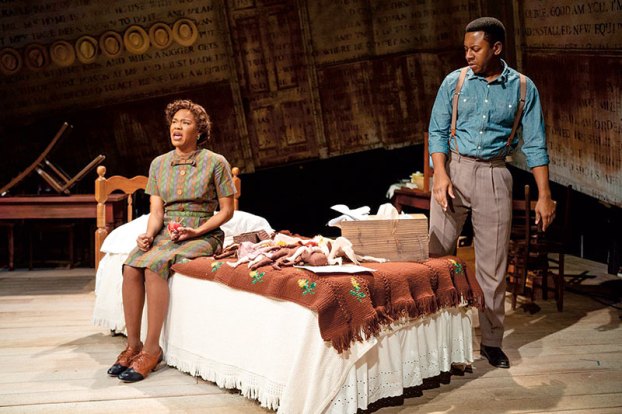 In August of 1955, a 14-year-old black youth named Emmett Till was lynched for supposedly flirting with a white woman. A new play, “benevolence,” looks at the events surrounding his death, and the repercussions still being felt today.

Till’s death, and the acquittal of his killers, galvanized the civil rights movement.

“benevolence” is the second play by Ifa Bayeza that deals with his murder. The first, “The Ballad of Emmett Till,” captured his youthful spirit. Now she shifts her gaze to two couples living in the Mississippi Delta — one white, the other black — and their connection to Till’s death.

In the play, Clinton Melton comes home from his shift at the gas station, where he saw a truck covered in Emmett Till’s blood. He wants to report his suspicions, but his wife is set against the idea.

“I need to tell someone,” he says.

Bayeza’s play is not a documentary, but it does pull from FBI transcripts, courtroom testimony, NAACP field reports as well as her own interviews with family members. She said Clinton Melton’s name is not as well known as Till’s, but their stories are connected.

“Clinton was murdered in broad daylight by a man named Kimball that reputedly was one of Emmett’s other assailants,” she said.

“benevolence” also focuses on Carolyn Bryant, the woman who claimed Till not only whistled at her but grabbed her around the waist and uttered obscenities. Years later she recanted that part of her testimony.

Carolyn’s husband Roy and his brother killed Emmett Till. They admitted to it publicly, in an interview, after a grand jury declined to indict them.

“How do I treat this character, given my sensitivity toward being a woman and then my ire being a black person — trying to balance those two?” she asked. “And as an artist, really wanting to be generous of spirit with all of the characters so that I treat them with humanity and with understanding — to be empathetic without being sympathetic?”

“Everyone should embrace these names and know these stories,” Wilkes said.

Bayeza explained the aspiration that led her to name the play “benevolence:”

Performances of “benevolence” run through March 10 at Penumbra Theatre in St. Paul.

The unlikely contributor to greenhouse gas emissions: Your favorite lake