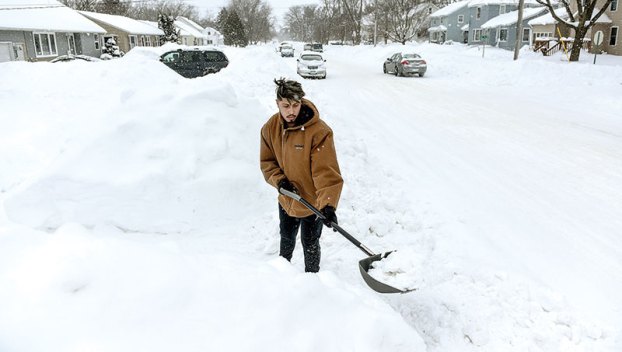 Jeremy Flores scoops out the end of his home’s drive. Herald file photo

Mower digging out after heavy snow; over one foot of snow reported in some areas

This weekend’s blizzard brought massive amounts of snow to the area, and many Mower County residents are still digging out.

The combination of heavy snow and high winds over the weekend made travel treacherous, with parts of Interstate 90 and Interstate 35 still closed as of Monday morning.

People work to free a stuck car from the snow near Sterling Main Street as Austin and the area were still trying to dig out of this weekend’s blizzard.

Gov. Tim Walz declared a peacetime state of emergency on Saturday, ordering the Minnesota National Guard to provide assistance and emergency relief services for stranded motorists in Freeborn and Steele counties. National Guard armories in Albert Lea and Owatonna were opened so they could be used as shelters.

Kwik Trip Store Manager Rebecca Waller said semi drivers began pulling into the Interstate 90 store Saturday night. As of around noon on Monday, estimated there were around 70 trucks parked in the lot.

“They are everywhere now and a lot of have been turned away,” Waller said. “It’s a sea of trucks if you really want to know.”

According to Austin Police Chief David McKichan, the Austin Police Department received over 50 calls of assistance from motorists with 10 reported accidents in the city between Saturday evening and Monday morning. Mower County Chief Deputy Mark May said during that same time period, the Mower County Sheriff’s Office assisted 72 motorists, many of whom were trapped in their vehicles. One motorist was stranded for 14 hours, May said. The MCSO also reported 29 abandoned vehicles.

Because the snowbanks are so high, McKichan stated that drivers should slow down at intersections to make sure they can clearly see other vehicles.

Road conditions this morning vary depending on location. Snowplow crews have worked 16-hour shifts over the past two days, beginning at midnight on Sunday, and will continue to do so today.

According to Public Works Director Steven Lang, main and secondary roadways are open and plowed, though rain on Saturday compacted some of the snow on the roads. Residential roads, however, are hit and miss, as snowplow crews are struggling with vehicles stuck in the snow. Lang said several residents are not abiding by the even/odd parking rule under the Emergency Snow Ordinance, which went into effect on Sunday. Vehicles are blocking snowplows in several locations, while others are preventing crews from having  places to put excess snow.

Lang said the removal will be expensive for the city. With all factors included, an average four-inch snowfall costs the city approximately $25,000.

The city has two Cedar River Watershed District-approved locations to store snow: Marcusen Park and near the corner of Third Avenue and Fifth Street Southeast. Snow is filtered and treated at those locations before running off into the Cedar River. Lang said that runoff from melting snow has not caused a flood since the 1960s, though it is possible, especially if a spring rain accelerates the melting process on still-frozen ground. 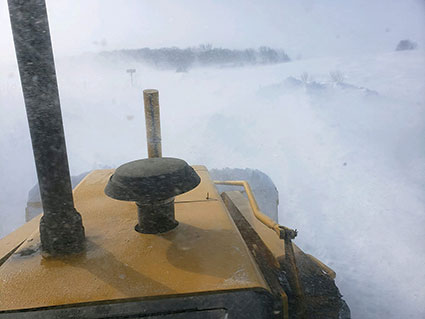 This submitted photo shows the conditions in the country as Jason Carlson of Hollandale digs out. He owns both a backhoe and skid loader. Photo submitted by Jessica Carlson.

Despite the road conditions, Austin Utilities crews over the weekend were busy dealing with customers losing heat. According to AU General Manager Mark Nibaur, crews responded to 76 calls over the weekend. Of those, 57 were calls of heat loss.

No electrical outages were reported.

To prevent heat loss, Nibaur said it was important to remove snow and ice from natural gas meters, which need air to operate properly. Snow and ice should be removed by hand, with a brush or a broom. Do not use sharp objects, hot water, salt or other ice melting chemicals. A path to the meter should also be maintained. 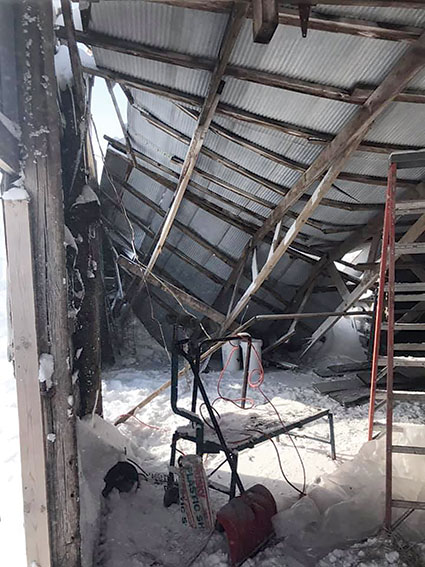 Snow fall from this past weekend’s storm caused the roof of this barn 10 miles north of Austin to collapse. Photo by Darcy Thompson