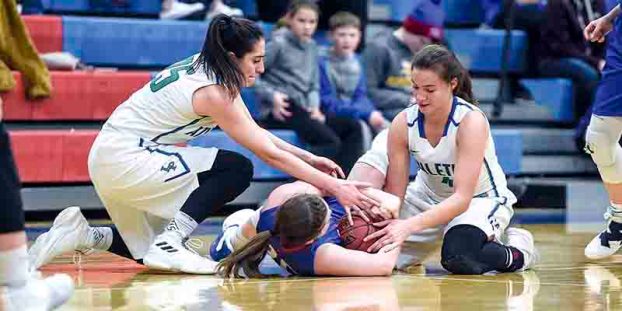 Lyle-Pacelli’s Olivia Christianson, right, and Myra Kraemer, left, try to wrestle the ball away from Southland’s Kayla Nelsen during the first half Wednesday night in Adams. Eric Johnson/photodesk@austindailyherald.com

ADAMS — The Lyle-Pacelli girls basketball team found themselves playing a game of survivor in Southland and they had just enough to walk away with a 49-47 win in Adams Wednesday night.

LP (17-4 overall) led by as many as 13 points in the second half, but the Rebels cut that lead to one point twice in the final minute. The Athletics, who committed 20 turnovers, weren’t able to relax until the final buzzer after Southland’s Lexi Smith, who had 11 points and 10 rebounds, missed a runner. 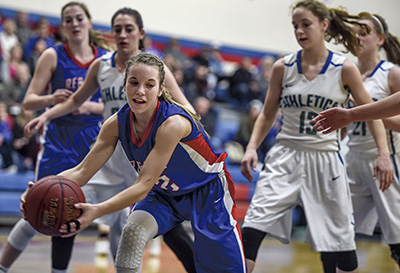 Southland’s Larissa Goslee tries to save the ball from going out of bounds against Lyle-Pacelli Wednesday night in Adams. Eric Johnson/photodesk@austindailyherald.com

LP was able to get a five-point cushion when Olivia Christianson had a steal for a lay-up to make it 46-41 with 2:09 left in the game and Christianson also sank two free throws to put LP up 48-45 with 24 seconds left. 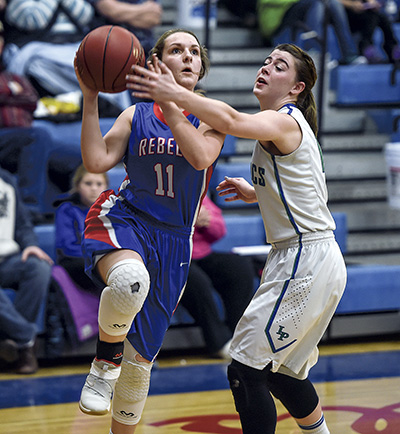 “We had to keep our composure,” said Christianson, who had 20 points, eight rebounds and four steals. “They had really good pressure and they played really good defense. We kept turning the ball over and we’ve got to take better care of the ball.”

Kayla Christopherson hit a free throw to put LP up 49-47 with 8.6 seconds left and she was also big force on both ends of the court throughout the night. Christopherson finished with eight points, six rebounds, four assists and four steals.

“We tried to stick together as a team and we cheered each other on and stayed focused. We tried to attack and hit them at their own game. We tried to hustle down the court and look for easy lay-ups, but we also had to keep in control,” Christopherson said. “I just want to thank my friends, family, teammates, everyone who showed up and God.” 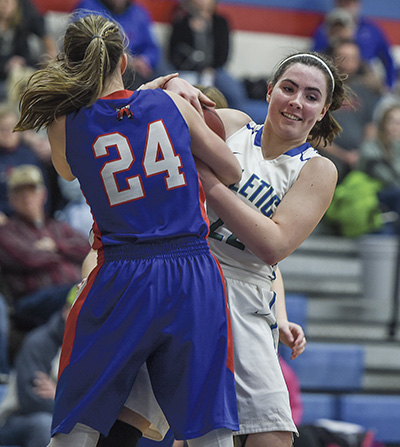 Lyle-Pacelli’s Lucy Nelson tries to wrestle the ball away from Southland’s Lexi Smith during the first half Wednesday night in Adams. Eric Johnson/photodesk@austindailyherald.com

The Rebels have now lost 12 games by 10 points or less as they will close out the regular season against Wabasha-Kelogg in Adams at 7:15 p.m. Friday. 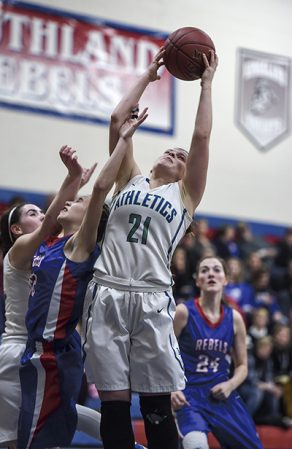