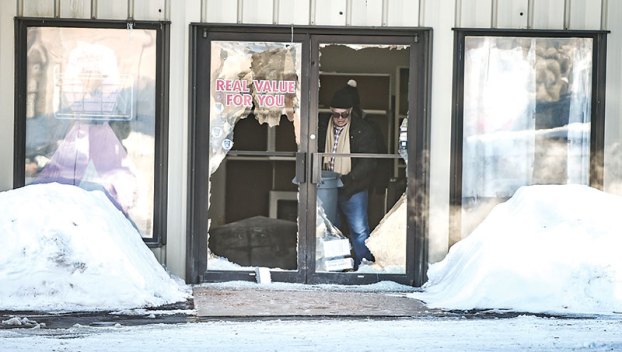 Ralph Donkers, owner of Donkers Hometown Appliance cleans glance from the doors after they were shot out in February. Herald file photo 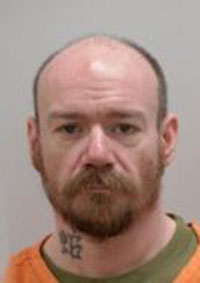 Bradley David Tate, 41, was charged with second-degree assault with a dangerous weapon, terroristic threats-reckless disregard, first-degree criminal damage to property-value reduced over $1,000 and attempted escape from custody, all felonies.

According to the court complaint, officers were called at 6:09 a.m. on Friday to the 1100 block of Second Avenue Southwest after a woman reported that Tate had walked into her home and told her someone was trying to kill him. She also reported Tate was carrying an assault rifle. Officers ordered Tate out of the residence and saw that he was wearing body armor and was armed with a knife, two 9mm pistols, and the rifle, which was loaded with .300-caliber ammunition.

Tate told police he resided next door with his girlfriend and that a man was inside his house trying to kill him. He also indicated he had fired several rounds from the rifle inside the house. Officers noted that Tate appeared hysterical and suspected he was under the influence of methamphetamine. They secured the firearms and placed Tate in a squad car.

Police searched Tate’s home and found no one inside. While clearing the house, officers found spent .300-caliber shell casings on the living room couch. They brought Tate into the residence and inquired about other firearms in the house. Tate said there was a gun strapped to the bottom of a bench in the living room, another in a purse in the bedroom and possibly some in a basement safe. 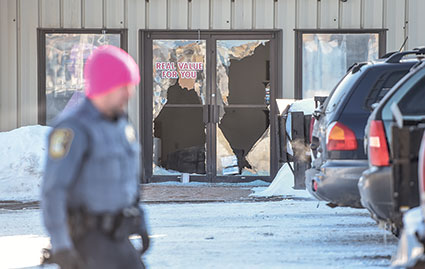 Austin Police were called to Donkers Hometown Appliance Friday after the windows in the front door were shot out. Eric Johnson/photodesk@austindailyherald.com

Employees at Donkers Hometown Appliances contacted police at about 7:30 a.m. on Friday after observing the front-door windows were broken. Police found bullet holes inside the store and spent shell casings outside. The damage was estimated to be over $1,000.

Tate told police that he had used methamphetamine that morning and had fired shots at Donkers. He was transported to the Mower County Jail and agreed to provide a blood sample, which was sent to the Bureau of Criminal Apprehension laboratory for analysis.

Police executed a search warrant on Tate’s residence and seized the following items:

Detectives interviewed Tate, who said he was using $25 worth of methamphetamine per day. He said he was previously employed at Donkers, but was fired because of his drug habit and poor work performance. Tate stated he and his girlfriend had used methamphetamine the night before and into the early morning and they got into a fight after he accused her of having an affair with the man he thought wanted to kill him. He admitted to firing the rifle inside the house.

Tate told the detectives he went to a friend’s house, near Donkers, and told them to call police. After getting no cooperation, he went to Donkers and shot at the building, hoping it would set off an alarm and bring a police response. When that did not work, he ran to his neighbor’s house and had her call the police. 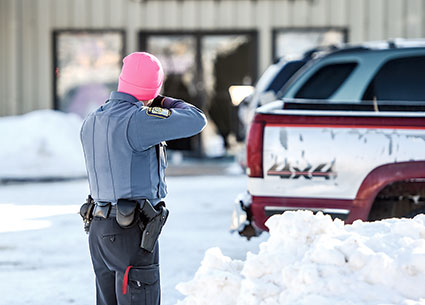 An Austin Police officer tries to guage angle during an investigation Friday morning regarding the windows at Donkers Hometown Appliance which were shot out earlier in the morning. Eric Johnson/photodesk@austindailyherald.com

Police spoke to Tate’s girlfriend by telephone on Saturday. She said she was out of town because she was “terrified” from the incident and did not know if it was safe to return to the house. She reported that Tate went from “completely normal” to hallucinating that he was seeing people at the door and pointed the rifle at her twice. She attempted to leave, but said Tate prevented her by slamming the door on her arm and wrist. When asked why she did not call police, she alleged that Tate broke her phone.

A Mower County detention sergeant reported to Chief Deputy Mark May that Tate attempted to escape Sunday afternoon. The sergeant said he was working in the intake area when he went into Tate’s cell to change a bandage on Tate’s arm. Per Tate’s request, the sergeant brought him some books. Tate then pushed past the sergeant as he exited the cell and ran into the main intake area, where he was stopped and taken back to the cell.

Tate will appear in court again on March 11. 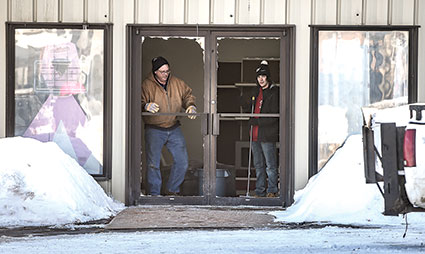 Donkers Hometown Appliance staff clean out the glass from the two front door windows which were shot out early Friday morning. Eric Johnson/photodesk@austindailyherald.com

We want to see your winter storm photos