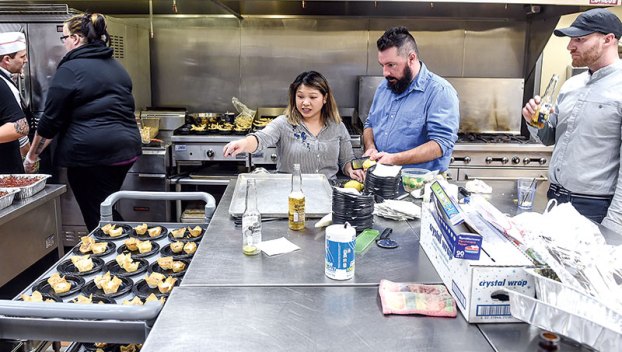 Varinh Van Vugt shows Phil Toupin where the fresh lemon zest will go as their team The Mommas and Papas prepare their spread for the Foodie Throwdown Saturday night at the Hormel HIstoric Home. Eric Johnson/photodesk@austindailyherald.com

For food lovers and chefs alike, Saturday’s Foodie Throwdown at the Hormel Historic Home was a success.

The eighth annual food competition featured local chefs preparing food according to a selected theme, which helps determine the winner. Proceeds from the event go toward the mission and preservation efforts of the Hormel Historic Home.

Around 180 ticket holders enjoyed the first-ever wine tasting, along with the sampling of appetizers. Five chef teams competed for bragging rights of creating some of the best food of the night. Holly Johnson, executive director of the Hormel Historic Home, said the evening’s festivities were jubilous. 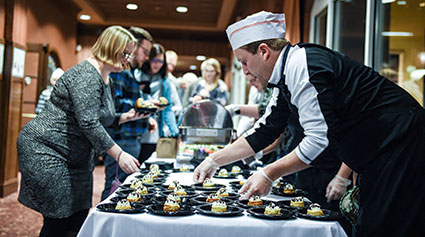 Chef Wade Kolander prepares cheesecake as tasting gets underway at the Foodie Throwdown.

“This year’s Winers and Diners gave us a fun element,” she said. “It was fantastic, and there was great camaraderie in what seemed like friendly competition to help us with our preservation and our mission.”

There were three winner categories during the Foodie Throwdown, which included Christine Wolner of Mayo Clinic Health System-Austin, delighting attendees with bacon-wrapped scallops and a sangria sorbet, who won in the People’s Choice categories for Choice Dessert and Main Dish.

Then came a tie for Choice Appetizer between Wade Kolander for his bacon-wrapped jalapenos, and Gaerth Hataye for his Asian pork belly buns.

Preliminary numbers for how much Foodie Throwdown brought in for the Hormel Historic Home were not in by press time. 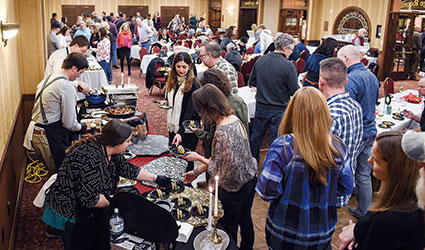 People begin lining up for tasting at the annual Foodie Throwdown Saturday night at the Hormel Historic Home.
Photos by Eric Johnson/photodesk@austindailyherald.com

Lori Boerhave, Melissa Anderson and Joan Rouse were newcomers to the throwdown. The three friends agreed it was a perfect event to attend on a Saturday night.

“It’s something for friends and we love to eat,” Boerhave laughed. She once worked in the food industry in the kitchen of a country club in the Twin Cities. Even though she’s been out of the cooking game, she said it’s still fun to be around chefs competing.

Mostly, it was a chance to just enjoy a night out.

“We love to get together and socialize,” Anderson said.

With the night being a success, the trio may make a return trip.

“We already are planning to come next year,” Rouse added. 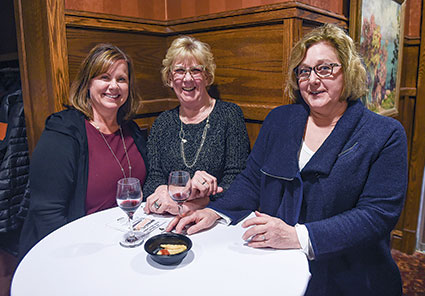 Melissa Anderson, from left, Lori Boerhave and Joan Rouse were first timers to the annual Foodie Throwdown at the Hormel HIstoric Home, taking advantage of the night out with friends and good food.

As for the success of this year’s throwdown, Johnson said she was pleased with how much joy the event brought to Austin, and hopes to see guests again next year.

“The fact that this is our eighth annual event that either sells out or nearly sells out is amazing,” she said. “We’re bringing a fun, entertaining event to the community, and the trek record is strong, and our chefs are upping their creativity. You’ll never have a bad meal for sure.”

Eric Johnson contributed to this story.

Landowners can place orders for a large variety of trees – bareroot and container grown – through March as part... read more