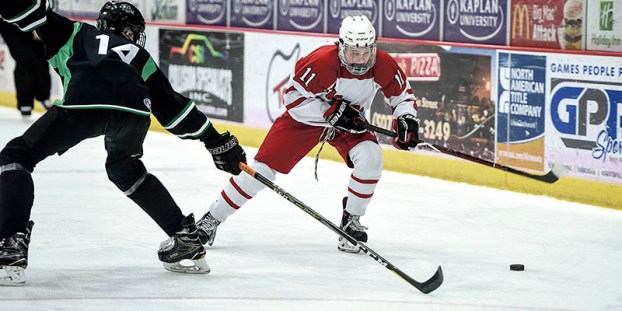 Austin’s Ben Stark with the puck in the La Crescent-Hokah zone Tuesday night in the first round of the Section 1A Tournament at Riverside Arena. Eric Johnson/photodesk@austindailyherald.com

Firing on all cylinders: Packers knock off Lancers

Shots were flying left and right from both ends of the ice in Riverside Arena Tuesday.

Luckily for the Packers, they had Ryan Flanders in net as the senior goalie stopped 43 of the 44 shots he saw to help No. 7-seeded Austin knock off No. 10 La Crescent-Hokah 6-1 in a Section 1A Tournament opening round game.

The Lancers (9-16 overall) tied the game at 1-1 when Sam Shishak scored a power play goal in the first period, but Flanders was perfect for the rest of the contest as his team pulled away. 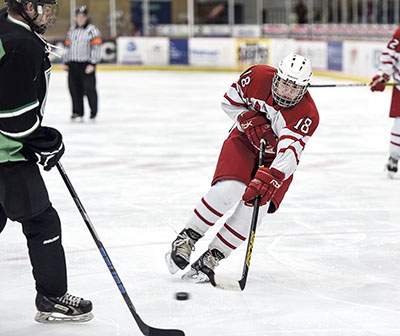 Austin’s Riley Wempner angles to put a shot on goal against La Crescent-Hokah Tuesday night in the first round of the Section 1A Tournament at Riverside Arena. Eric Johnson/photodesk@austindailyherald.com

“The mindset going into every game is to keep myself between the puck and the net,” Flanders said. “It’s playoff hockey and you’re already buzzing going into the game. Once you start getting a lead and you start rolling, it feels really good.”

Austin took the lead for good when Nate Murphy created a turnover and scored on a pin-point slap shot to make it 2-1 early in the second period. Garett Schaeffer and Hunter Guyette, who finished with two goals, each scored in a one-minute stretch later in the second period to give the Packers (8-17-1 overall) a 4-1 lead.

The goal was just the second of the season for Murphy, a senior defenseman who had his first goal in Austin’s first home game of the season. 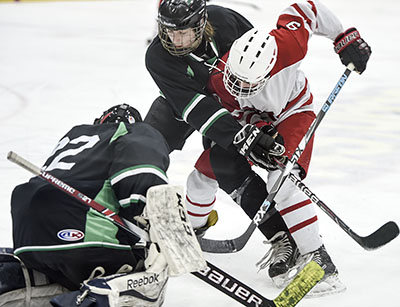 Austin’s Bubba Grunewald crashes the net, going for the loose puck against La Crescent-Hokah Tuesday night in the first round of the Section 1A Tournament at Riverside Arena. Eric Johnson/photodesk@austindailyherald.com

“Someone had to give it their all and put a puck on the net and it happened to be me,” Murphy said. “All of us defenders have a competition to see who can score the most goals and now I’m tied for first.”

The Packers had beaten the Lancers 6-0 last Friday, but Murphy was expecting La Crescent to come out shooting on Tuesday.

“It’s playoff hockey. We knew it would be a completely different game than last Friday night and we knew they would come out hard,” Murphy said. “We were lacking in our defensive zone to start, but we picked it up as the game went on.”

“Our coach likes to talk about how sometimes we flip a coin on how we play,” Flanders said. “I think we flipped about three times and we landed tails all three times the last we played them last time. Hopefully we’ll show up and take it to them Thursday.” 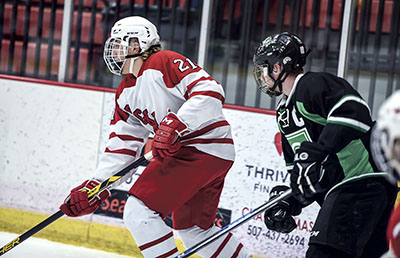 Austin’s Hunter Guyette brings the puck out away from the boards against La Crescent-Hokah in the first period Tuesday night in the first round of the Section 1A Tournament at Riverside Arena. Eric Johnson/photodesk@austindailyherald.com 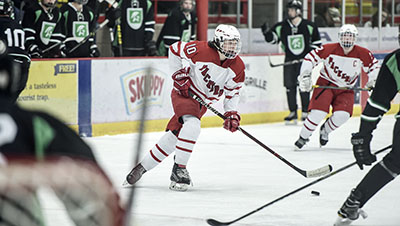 Austin’s Kaleb Ree skates the puck across the La Crescent-Hokah zone in the first period Tuesday night in the first round of the Section 1A Tournament at Riverside Arena. Eric Johnson/photodesk@austindailyherald.com

Landowners can place orders for a large variety of trees – bareroot and container grown – through March as part... read more