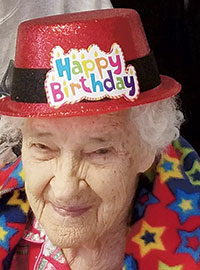 She was born on a farm in January 1924 near Charles City, Iowa. She grew up on the farm and drove teams of large horses during World War II. In 1946, she married Charles Drenth of Clarksville, Iowa, in the Little Brown Church, Nashua, Iowa. They lived in Charles City, Brownstown, Illinois, Lansing, Minnesota, Lyle, Minnesota, and Racine, Minnesota. During her 50 years in Lyle, she helped her husband in his excavation business, was an excellent seamstress, making her children’s clothes, remodeled her house and tended large vegetable and flower gardens.

Evelyn was a hard worker. While taking care of five children and almost half acre of vegetable and flower gardens and lawn, she worked at the Burghard & Sons Produce and at Judy’s Grocery store in Lyle. Evelyn always kept busy crocheting, quilting and doing embroidery. She was an active member of the American Legion Ladies’ Auxiliary, Loyal Order of the Moose Ladies’ Auxiliary, and Veterans of Foreign Wars Ladies’ Auxiliary. She assisted her husband with fire department activities, such as writing and sending out the monthly notices. Later she volunteered at the Sheriff’s Boys Ranch south of Austin, Minnesota, working as a cashier in their thrift shop. Evelyn was a consummate baker, always having fresh bread and cookies for anyone who visited her home. She was a member of Faith United Methodist Church in Spring Valley, Minnesota, but for the past five years attended St. John’s Lutheran Church in Stewartville, Minnesota.

Evelyn loved to travel. She visited all 50 states, including many trips to Hawaii and cruising to Alaska. She visited England, Scotland, France, Germany, Belgium and Holland. She cross-country skied in Austria, cruised through the Panama Canal, and backpacked in Ireland. An avid dancer, Evelyn took up line dancing in her 70s.

A good carpenter as well, Evelyn helped her son Ed remodel her house and two of his houses. In her 70s and 80s, she helped him build three houses near Racine, one of which became her home in 2000. She loved being in the country, enjoying the wildlife and her many flower gardens. She lived in her own home until she passed away just after her 95th birthday.

Evelyn was preceded in death by an infant son, Freddie; her husband, Charles; and an infant great-grandson Jordan Zamora. She is survived by her daughter, Don; sons Robert (Mary) and Ed (Kay); daughter Eileen (Duane Thede); five grandchildren; and eight great-grandchildren.

She donated her body to Mayo Clinic and will be interred in the Mayo vault at Oakwood Cemetery in Rochester, Minnesota.