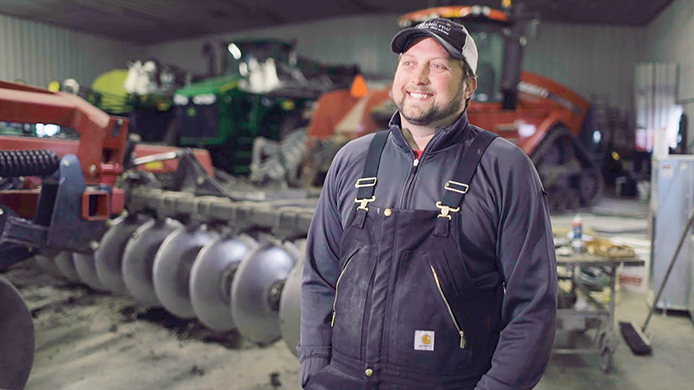 Andrew Hamilton, a Mower County farmer who placed 18 wind turbines on his land, will be featured in the documentary Power of Minnesota. The film will premiere at the Winona Film Festival this Saturday. Photo provided

A familiar face will be hitting the big screen this Saturday in a documentary about clean energy.

Andrew Hamilton, a Mower County farmer, will be featured in the “Power of Minnesota” documentary that’s being premiered at the Frozen River Film Festival in Winona at 6 p.m. on Saturday, Feb. 9. The film’s focus is on the stories of landowners, officials, educators and businesses behind clean energy developments around Winona and southern Minnesota, along with the state’s clean energy economy (which provided 25 percent of the state’s electricity last year).

Hamilton had 18 wind turbines placed on his family’s land and will be sharing his story about clean energy in the documentary. Those interested in seeing the film can go to the Winona State University Performing Arts Center’s Black Box Theatre at 450 Johnson St. There, attendees can watch the film, hear about local projects, find actions they can take, connect with others and win energy-related prizes.

“Winona County residents have told us about their desire to be part of the future of Minnesota’s energy landscape and that they feel a responsibility to act,” shared Camille Morse Nicholson with Jefferson Center. “The Frozen River Film Festival is an exciting opportunity to gather as neighbors and collaborators, discuss the impact of home-grown energy on our state, and identify top ways to take action as individuals and communities.”

Those interested in getting tickets for the documentary can buy tickets at www.frff.org/tickets or at the Festival Office at 121 E Third St. in Winona.

About ‘Power of Minnesota’

The documentary was created to highlight the benefits and successes of solar and wind power projects throughout the state, and to foster community engagement and awareness.

Minnesota is home to more than 59,000 clean energy jobs, and helps farmers generate income for families and property tax revenue that supports local schools, parks and police, while focusing on the theme of stewardship.

There are several highlights of Minnesota’s clean energy economy:

•Minnesota continues to lead the nation in solar energy production. Despite its lengthy, subzero winters, Minnesota has annual solar resources similar to areas of Florida and Texas. Minnesota now has over 800 megawatts (MW) of solar energy, up from 32 MW in 2015.

•In 2018, Minnesota generated more than 20 percent of its electricity from wind power. In the same year, MN counties received $12.7 million in wind energy production taxes. On top of that, Duluth is ranked in the top 10 in the nation for transporting wind equipment.

During the event, Briana Baker, Southern MN Organizer with Minnesota Interfaith Power and Light, who also serves as the narrator of the documentary, will be speaking at the event, along with John Howard, Natural Resource Sustainability Coordinator for the City of Winona, John is the first-ever sustainability coordinator for Winona.

“Winona is undertaking innovative and ambitious clean energy actions, setting an example for communities across Minnesota,” said Tara Ritter with Institute for Agriculture and Trade Policy. “This event will engage folks in discussion around how they can individually join the movement.”

Following the screening, the Clean Energy Resource Teams will host an hour-long discussion facilitated by the Jefferson Center and the Institute for Agriculture and Trade Policy. Participants will learn more about the growing clean energy economy and envision what is possible for the community.

“There are easy things people can do in their own homes, businesses, and schools to save energy and tap into renewable energy,” said Chris Meyer with the Clean Energy Resource Teams. “We’re excited to help folks take those actions and to make connections to what’s happening in Winona, our region, and across Minnesota.”