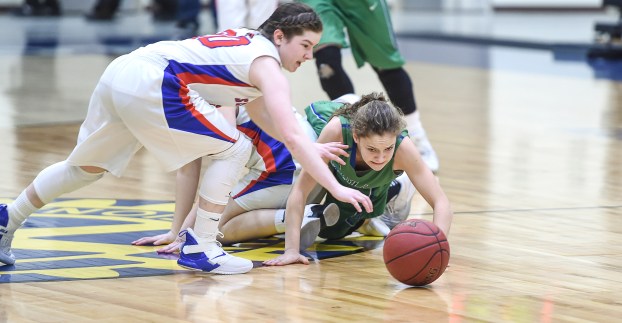 Lyle-Pacelli’s Kayla Christopherson lunges for a loose ball against Southland in the Section 1A quarterfinals at Mayo Civic Center Tuesday night in Rochester. Eric Johnson/photodesk@austindailyherald.com

ROCHESTER — The No. 4 seeded and defending Minnesota Class A state champion Lyle-Pacelli girls basketball team took care of business as it knocked off No. 12 Southland 56-44 in the Section 1A quarterfinals Tuesday in Mayo Civic Center.

Olivia Christianson racked up 29 points, seven steals and four rebounds as she paced LP on both ends of the court. Christianson said it felt good to back on the court at Civic Center, where the Athletics have played in some big games over the past few seasons. 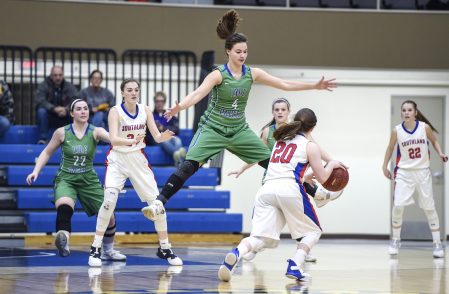 Lyle-Pacelli’s Olivia Christianson leaps in the air on defense against Southland in the Section 1A quarterfinals at Mayo Civic Center Tuesday night in Rochester. Eric Johnson/photodesk@austindailyherald.com

“It does bring back a lot of memories. I haven’t been here in like a year and it set the fire,” Christianson said. “I was so ready stepping in here. The environment is amazing.”

LP head coach Anna Meyer credited Christianson for setting the tone on offense and defense in the win.

“She carried us on both ends of the court. She’s pretty unstoppable,” Meyer said. “I don’t know if there’s too many teams that can match up with her. She’s outstanding.” 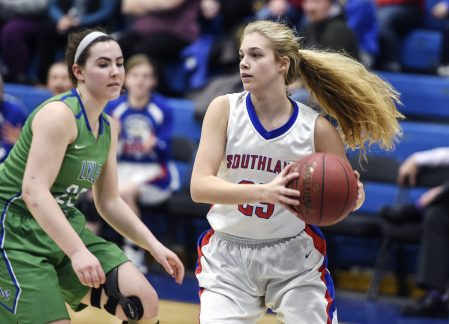 Southland’s Kelsey Mensink looks for an outlet after getting a rebound against Lyle-Pacelli in the Section 1A quarterfinals at Mayo Civic Center Tuesday night in Rochester. Eric Johnson/photodesk@austindailyherald.com

After trailing 11-1 to start the game, the Rebels (7-18 overall) came back and took a 25-24 early in the second half on back-to-back hoops by Larissa Goslee, who had 18 points and eight rebounds.

But the Athletics used a 9-2 spurt to go up 39-30 with 11 minutes left in the game. Kayla Christopherson had a key three-point play during the rally.

The Athletics (22-4 overall) will now take on top-seeded Grand Meadow in a Section 1A semifinal game at 4 p.m. Saturday.

“We need to a better job of rebounding and moving defensively,” Meyer said. “We’re excited about our chances on Saturday.” 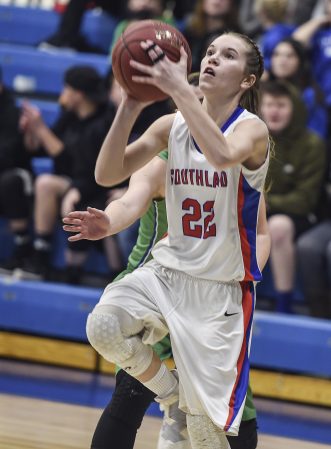 Southland’s Larissa Goslee puts up a running shot along the baseline against Lyle-Pacelli in the Section 1A quarterfinals at Mayo Civic Center Tuesday night in Rochester. Eric Johnson/photodesk@austindailyherald.com