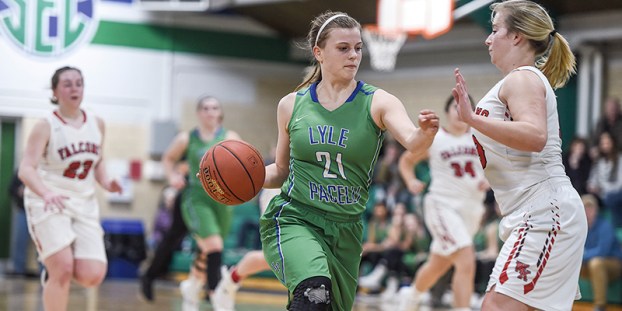 Lyle-Pacelli’s Abby Bollingberg drives off the break against Wabasha-Kellogg in Section 1A Tournament play Thursday night at Pacelli. Eric Johnson/photodesk@austindailyherald.com

The No. 4 seeded Lyle-Pacelli girls basketball team opened up its postseason with intensity and fury as it ran past No. 13 Wabasha-Kellogg (5-18 overall) 69-42 in a Section 1A Tournament opener in Pacelli Gym Thursday.

The Athetics (21-4 overall) forced 10 turnovers in the game’s first eight minutes as they jumped out to a 25-2 lead and the Falcons never got closer than 15 the rest of the way. 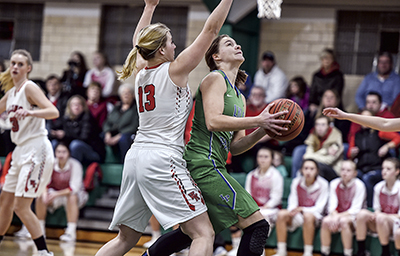 Lyle-Pacelli’s Olivia Christianson turns to the hoop in the first half against Wabasha-Kellogg in the first half of a Section 1A West Tournament match-up Thursday night at Pacelli. Eric Johnson/photodesk@austindailyherald.com

“It really came down to the fact that it could be our last game. That’s what drove me,” Bollingberg said. “It was my last time on this court, so why not leave it all out there.”

Olivia Christianson set the tone with her defense as she racked up eight steals. She also added 32 points and eight rebounds.

After early struggles the season, the Athletics are riding a high on a 10-game win streak.

“I have confidence in every one of my teammates,” Christianson said. “I think we all know our roles and we can count on everyone.” 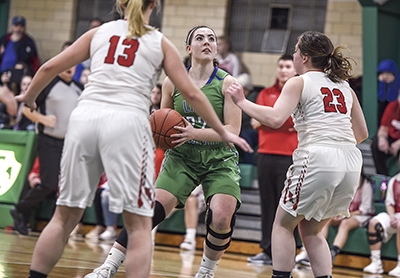 Lyle-Pacelli’s Lucy Nelson pulls up off the drive against Wabasha-Kellogg in a Section 1A Tournament match-up Thursday night in Pacelli. Eric Johnson/photodesk@austindailyherald.com

LP, which won the Minnesota Class A State Girls Basketball state title last season, opened this tournament the way they finished last year’s tournament as they came out on a 9-0 run. LP head coach Anna Meyer said she hopes her team continues that intensity moving forward.

“We just talked about setting the tone right away,” Meyer said. “Tonight there was no doubt that we wanted every loose ball and every rebound that was out there.”

LP will now advance to the Section 1A quarterfinals, where it will take on No. 12 seeded Southland in Mayo Civic Center at 7:30 p.m. Tuesday. The Athletics beat Southland 49-47 last week.

“I guess we’re considered underdogs (in the tournament) this year, but we have experience and that’s our benefit,” Bollinbgerg said. “We know what to do and how to play there. I have no worries.” 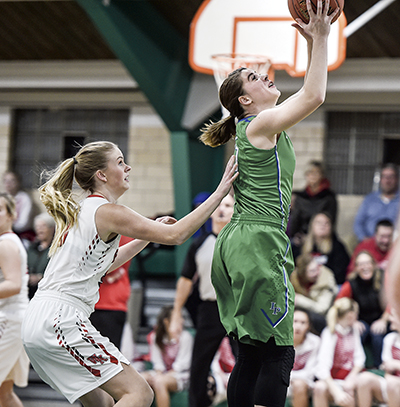 Lyle-Pacelli’s Rachel Nelsen pulls down a lay-up during the first half of their Section 1A Tournament against Wabasha-Kellogg Thursday night at Pacelli. Eric Johnson/photodesk@austindailyherald.com 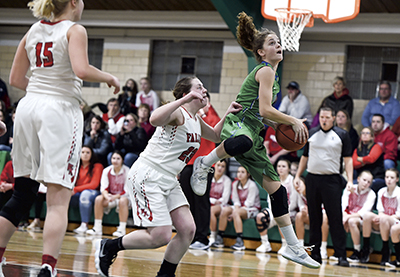 Lyle-Pacelli’s Kayla Christopherson comes down with a high pass against Wabasha-Kellogg in the Section 1A Tournament Thursday night at Pacelli. Eric Johnson/photodesk@austindailyherald.com