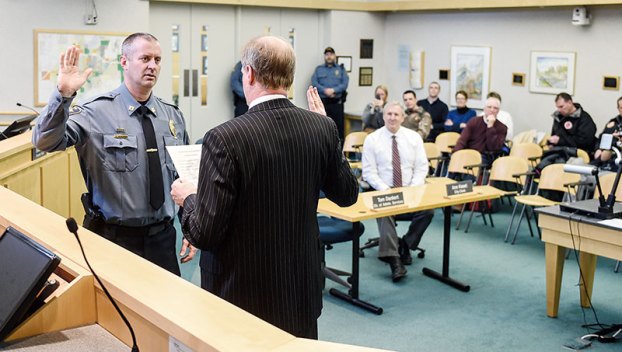 Chief David McKichan is sworn in in front of family, friends and colleagues as the new chief of the Austin Police Department Wednesday morning. Photos by Eric Johnson/photodesk@austindailyherald.com

Austin officially has a new chief of police.

McKichan, a 21-year veteran of the Austin Police Department, has been captain for just over eight years. Joining the department was McKichan’s first job in law enforcement.

McKichan said he was touched by how many showed up to support him at his swearing-in.

“This is incredibly humbling,” the new chief said following the ceremony.

McKichan was sworn in with his family, members of the Austin Police Department and members of the community in attendance in the City Council chambers. Among them was Krueger who worked alongside McKichan for a number of years.

Krueger said he has no doubt McKichan is the right man for the job.

“I’ve been working with him as detective and then second in command for these last eight-plus years,” Krueger said. “The department is in good hands.” 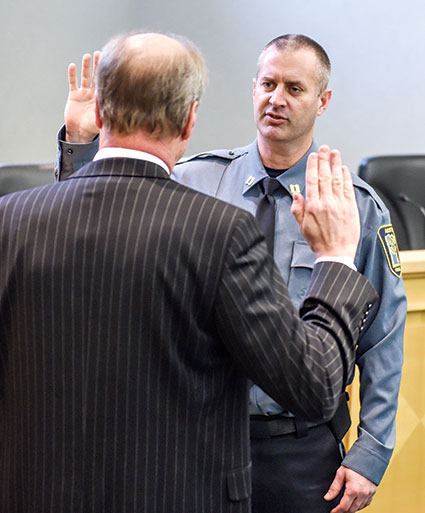 As McKichan moves forward, he said he will rely on the time and relationships he’s built in the community over the years.

He sees that kind of foundation as crucial to fulfilling the role of police chief. He also sees the skills he’s used in forging those relationships as another integral part of his job.

“I think you have to have good social skills and the ability to connect,” he said. “Working with the community and listening to those concerns.”

McKichan is coming into the chief’s role as Austin grows and continues to diversify.

“It’s very exciting to talk about Austin and the great growth and great things going on,” he said. “There are a lot of positive things and diversity is a big driver with that. It’s been an incredible thing for us to have that cosmopolitan feel.”

Over the years, McKichan has looked at Krueger as a mentor and a supporter of his ambitions to move up in the department and as outgoing chief, Krueger said he had one more piece of advice for the new chief.

“The biggest thing is be patient,” Krueger said. “A majority of this job is fantastic.”

Seeking to curb the usage of tobacco in minors, the Austin City Council unanimously approved a draft ordinance Tuesday that,... read more