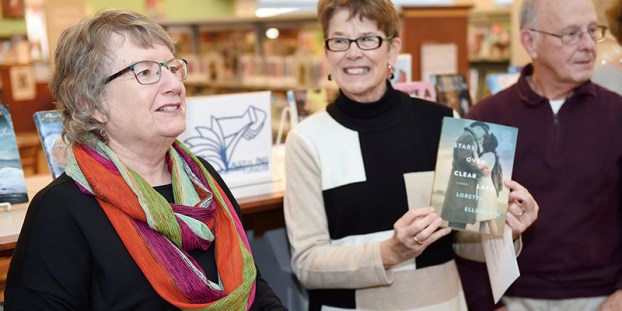 Peggy Benzkofer, a member of the Austin PageTurners, announces the group’s city-wide read during a press conference Friday at the Austin Public Library. Eric Johnson/photodesk@austindailyherald.com

Dancing into the spotlight for this year’s city-wide book read was “Stars Over Clear Lake,” the Austin Page Turners announced on Friday morning.

The 2017 adult novel written by Loretta Ellsworth, who currently resides in Lakeville, Minnesota, was featured as the 18th book that the Austin Page Turners chose for its city-wide book read. Each year, the group features a book written by a Minnesota author.

A Mason City, Iowa native, Ellsworth grew up in a family of seven and never considered becoming a writer until she had four children, according to her biography. She worked as a middle-school Spanish teacher, and wrote four young adult novels such as “Unforgettable” and “In Search of Mockingbird.”

With each selection, events that tie into the theme of the work lead up to a visit from the author. Ellsworth plans to visit Austin on April 23, and more information regarding an events schedule will be coming out soon.

“Book groups are looking forward to it,”said Bonnie Rietz, Page Turners president. “We’re so proud of our project that has been going on for 18 years.” 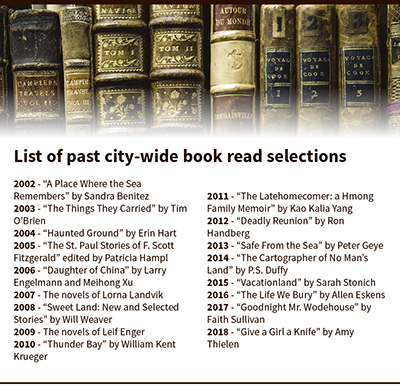 Described as a romantic story, “Stars Over Clear Lake” is the first novel in which Ellsworth targets an adult audience.

The story takes place in Clear Lake, Iowa, and is set in the Surf Ballroom during the 1940s, where boys spent their last nights before shipping off to war, and where Lorraine Kindred, the main protagonist, gets swept away in a star-crossed romance, according to Holly Johnson, executive director of the Hormel Historic Home.

She is romantically involved with the town’s most popular boy, Scotty, and then finds herself intrigued by a German POW named Jens, who worked on her family’s farm as part of a crew from a nearby prison camp. The plot moves between the 1940s and the present day, and touches on love and loss. The Surf Ballroom is also the place where Ellsworth’s parents met, and was a source of inspiration for the story.

One of the key interests that readers may have with the story was how Austin was also mentioned in the story, and how many ballrooms no longer exist today. There was also the exploration of POW camps on U.S. soil that many may not have been aware of during the wartime.

Historically, the book that’s chosen by Page Turners often become the most checked out book from the Austin Public Library, according to Julie Clinefelter, APL head librarian. More copies of the book will be available on Monday, and local bookstore Sweet Reads plans to order additional books after almost selling out.

With Ellsworth’s work in young adult genres, Bruce Richardson, a Page Turner, mentioned that the group was hoping to work with Ellis Middle School and getting Ellsworth connected to students in English classes prior to her visit in April.

“It was a good book,” Richardson stated. “We look forward to seeing her.”