Ikes to work with county on septic system compliance

Both The Izaak Walton League and the Mower County Board want to achieve the same goals — clean water.

The Mower County Board discussed this during Tuesday morning’s meeting regarding the involvement of the Izaak Walton League over a potential collaborative effort to improve the water quality in Mower County. County Administrator Trish Harren explained that the Ikes have visited with her and discussed their intent and plans.

“They requested to work collaboratively with the county and possibly establish an ad hoc committee,” Harren said. “From their request, they want to work in partnership.”

Angie Knish from Mower County Public Works stated that she was not against working alongside the Ikes in this endeavor, noting that she had dialogue with the organization over water quality concerns.

The meeting was highly publicized in both local and state media outlets, with statements made by the Ikes about how Mower County’s waterways were not safe for skin contact or recreational activities because fears of high levels of E.coli bacteria and spread information that was contradictory to state and local findings, claiming the waterways in the Mower County as an “emergency.”

Although water quality has been a priority for the area, the subject at hand isn’t new. The Mower County Soil and Water Conservation District and the Cedar River Watershed District acknowledged that elevated E.coli bacteria levels were consistent issues, but it’s not an isolated situation.Many other riverways, such as Root River and the Zumbro River, also struggle with E.coli levels along with watershed districts statewide.

One of the previous goals that the Ikes had proposed was to ensure complete compliance checks for residential septic systems, agricultural areas and addressing surface water runoff during a heavy rain event and flooding within a specific timeframe.

However, those requests are much easier said than done, as funding shortfalls and exorbitant costs for homeowners may prove to be hefty obstacles to overcome in replacing septic systems. Keeping them up to date is legally mandated, and often comes with a significant price tag for the homeowner that runs an average between $10,000 to $15,000 to replace.

“They’ve got to realize what the costs are,” said Commissioner Tim Gabrielson. “I think they’re coming around that fear tactics don’t work.”

The Minnesota Pollution Control Agency (MPCA) released a FAQ sheet last week that explained several key things about water quality and the status of them in southeast Minnesota and statewide:

Where do bacteria in Minnesota waters come from?

Bacteria in state lakes and streams mainly come from sources such as failing septic systems, wastewater treatment plant releases, livestock and urban stormwater. Waste from pets and wildlife, is another lesser source of the bacteria. Additionally, human and animal waste may contain pathogens such as viruses and protozoa that could be harmful to humans and other animals.

What other factors affect the presence of bacteria in lakes and streams?

What does the standard for bacteria tell us about the water?

How do I know if a lake or stream is safe for streaming?

How do I avoid getting sick from pathogens in the water?

The state does not have a list of “safe” bodies of water for recreation.

Use common sense to reduce the risk of pathogen exposure, which is more likely present if stream levels are high or water is muddy. Do not go into the water with open cuts or sores if you feel ill, and don’t ingest water. Take a shower or wash your hands afterwards.

Board Chairman Mike Ankeny expressed that by forming a committee and having a non-voting position, individuals from the organization could help with establishing a plan to help better address the needs of improving water quality in the area through actions such as septic system compliance checks.

Harren also noted that by working with the Ikes, the county could educate them on certain processes and provide “accurate information” to prevent the spread of misinformation to the public, and to instead work together to achieve a common mission.

“I think the Ikes have an understanding and extended this as an olive branch and want to work with us,” she said. “We all have the same end goal in mind.” 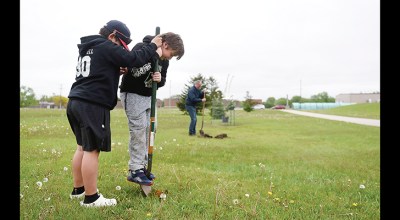