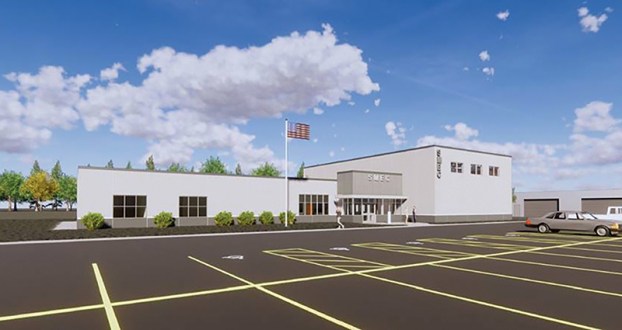 An architect’s rendering of what will be the Southern Minnesota Education Consortium’s new $4.1 million education center, which will provide accessibility and additional special education programming to meet the needs of students in the seven district cooperative. Construction aims to start in April 2019. Provided by SMEC.

Students from seven school districts will soon have more of their needs met by being closer to home.

For years, SMEC dreamed of having a center where programs that weren’t previously being offered to students could become accessible and becoming self-reliant and sufficient without having to rely on neighboring, larger school districts to provide programming.

Also with the closing of the Wykoff school in the Kingsland Schools District, the alternative learning center lost its home as well.

“The ability to have a level four program that was off-site has been missing for years,” said SMEC Executive Director Dan Armagost. “That led to us looking at the building project. … we were kind of homeless.”

With the approval of the $4.1 million education center, that will be built off of Interstate 90 and Highway 56, the seven districts can now offer more services that were previously hindered by space or by costs. The new 13,000 square-foot building will take care of two areas crucial to the co-op: an alternative learning center and the ability to offer level-four programming for students. The new center will fit about 18 level-four program students and between 40 to 50 alternative learning center students.

“We’re extremely excited,” Armagost said. “It’s finally coming into fruition and seeing everything fall together has been amazing. Our goals for years was to be self-sufficient within our small districts and communities without having to rely on our bigger neighbors, and that we should be able to provide for our students. It’s just, in a big sense, an accomplishment to be able to say ‘if your students have a need, we can meet it here. We can meet it here at SMEC.’”

SMEC applied for a conditional-use permit in late October, which was approved by the Mower County Board early last month. The next part of the process for SMEC to build the new facility will be the start of the bidding process with bids due on Jan. 15.

The hope was to begin construction starting April 2019 and have the building’s construction finished by late December 2019, with students and staff being able to move to the building after Christmas break in January 2020.

One of the benefits having a new education center will be the ability to provide continuing education, without having to transport students to bigger school districts that may be further away. Armagost explained that having a centralized location for the center will be cost-saving and more accessible for SMEC members.

“It’s a program that we are in charge of, and we don’t have to rely on our neighbors saying when a student can come back or not,” he said. “We don’t have to send them elsewhere, and it’d be shorter bus rides in some cases. I think it gives access to the students for the services they need.”

Having the full cooperation of all seven districts was crucial to making the new education center become a reality. If one member of the consortium backed out, then the existing support would not have been enough to have the building built.

“We have to work together to provide the services that our students need.” Armagost said. “Sometimes, smaller school districts can’t have a continuum of services.”

Every aspect of the new school’s design and layout had purpose and was intentional. Denise Kennedy, SMEC special education coordinator, stated that many of the colors and designs of the rooms and building were meant to cater to a specific student population with different needs and challenges.

Once the building is completed, Kennedy anticipates helping train staff and transition students over to the facility next year.

“We have only once chance to get this together for our students,” she said. “We want to get it done and get it done right. It’s going to meet the needs of our students. It definitely has been a long time coming.”

Now that the details are finally coming alive in front of those involved with SMEC’s mission to deliver accessible special education services to the families they serve, it’s only a matter of time before the seven school districts will be able to best cater to their students in a place that’s closer to home.

“Just the fact it took seven districts to work collaboratively together and all the countless hours of volunteer time from our families, our staff and our districts, it’s a big thank you to those who have been involved to get to this point,” Armagost said. “If one district held out, it could’ve sunk this project. This is a great example of how we can do great things and we can do it together.”

Austin man sentenced to 24 years for sexually assaulting underage girl; Must serve a minimum of 16 years