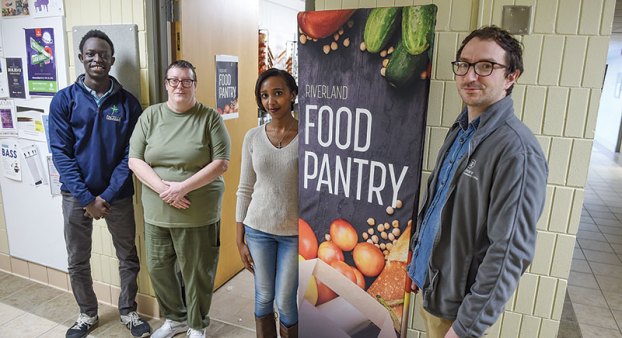 For some college students, being able to afford school means going hungry.

Riverland Community College Student Senate created the food pantry a little more than a year ago and has since seen a large number of students utilize the pantry for necessities, such as food items and toiletries.

Stationed inside an inconspicuous closet, the pantry allows students to enter and take up to three items to make a meal for that evening. Students can return to take another three items if needed the next day.

The pantry is open Monday through Friday and is free to Riverland students with a student ID.

“When there’s an emergency, some need help right now,” said Keith Cich, Riverland Community College student senate adviser. “It’s an issue that’s a little hidden on college campuses. A great thing about this is that everything about this is student-led and student-managed.” 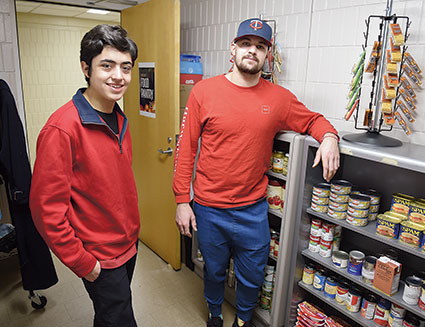 Addressing the issue of  hunger for college students has increased during the last few years. With economic shifts, let alone rising tuition and housing costs, more students are forgoing meals in order to afford a higher education.

The trend has become more common statewide at local and state universities, as well as at some private colleges.

There were also tighter regulations that kept many students from qualifying for the Supplemental Nutrition Assistance Program, a food stamp program.

According to Pal Koak, senate president, the student senate had marketed the food pantry during Welcome Week and hopes that the community continues donating to help stock the pantry with non-perishable food. So far, the food pantry only exists on the east campus, but there was hope another food pantry could be established on the west campus. Students who mostly attend classes on that side of Riverland would have easier access.

“We have a need now,” Koak said. “We’ve been partnering with the Ag Club, and we’re really hoping to have a second food pantry. We may look toward more fundraising and get some help from the community level.”

However, the number of students still stopping at the pantry has continued to stun those who helped launch the food pantry.

“I knew that there was a need for it,” said Seni Wubneh, student senator, “but not this much. The food pantry definitely made quite a difference.” 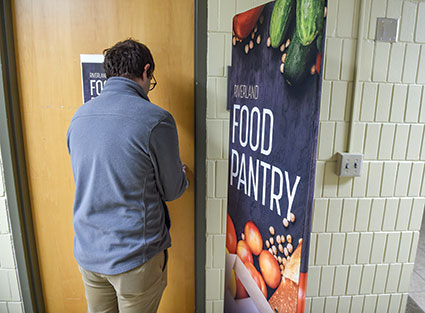 For Brad Morris, 22, he knew what it was like to have to make a decision between eating dinner or having enough money to pay for school. So, he frequents Riverland’s Food Pantry to take some items to help him get through until the next day.

“It has been very helpful,” Morris said of the pantry. “It definitely helps a lot. I hope that it gets more donations or donors for it. When you have no money, you don’t have a choice.”

Although it was difficult to know for certain how many students have been serviced by the pantry, Cich estimated there were between 20 to 30 students visiting the pantry per day.

Last year, between November and May, there were about 500 visitors to the food pantry, and the number has “greatly increased,” according to Cich.

Bernaldo Guarderas, 19, said international students may not have access to cash right away, or when students don’t qualify for FAFSA, students may face an emergency where they might not have anything to eat.

Guarderas also experienced hunger at some point during his college career and goes to the food pantry every day to be able to get the necessary nutrition to help him get through the day and through his classes.

“Some students don’t have a car on campus to get to the stor, or don’t have enough money to get a meal,” Guarderas said. “The food pantry has been very helpful, and I’ve seen many students getting to know about it.”

“I believe in this”

When operating the food pantry, Janice Trigilio refers to the students who come regularly as “her children.”

Throughout the week, Trigilio runs the pantry everyday and helps students pick out three items to take home with them. Sometimes, she’ll send them with some other necessities like coats, deodorant or shampoo.

Even though the pantry gets restocked often, there would sometimes be 10 students at a time inside the pantry, and the groceries would fly off the shelves after just being stocked.

“I was floored by how many people would come in …I believe in this,” said Trigilio, who is also a Riverland student. “When you’re in the same classes with the same people for 17 weeks, you kind of hear and learn things. I ask them to come visit me at the pantry. I’ve been homeless and I have been there. I’ve been on food stamps, and sometimes, it’s not enough.”

Aside from making sure students have accessibility to the pantry, there’s also the issue of pride. Students may feel embarrassed to ask for food.

However, Cich said Riverland’s community has made the atmosphere more approachable to receive help.

“Here at Riverland, it’s one large community where everybody helps everybody, and will not let anyone go hungry,” he said. “We are looking to address hunger, and Riverland welcomes all different walks of life.”

Warm Hearts, Warm Hands; Local group works to provide mittens, hats for those who need them

December is a year of holiday warmth, but a devoted group in Austin are helping ensure that warmth spreads. Gift... read more