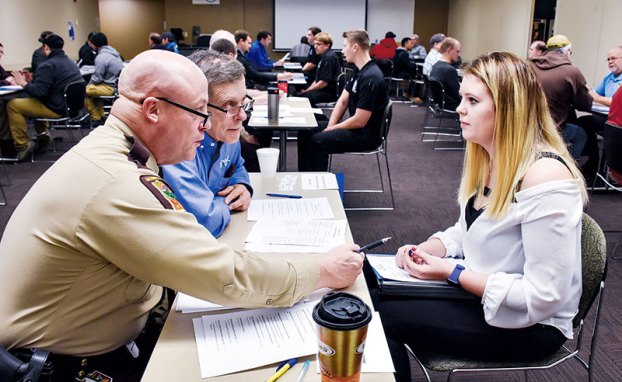 Before going out into the real world, Riverland Community College students had a chance to prepare for one of the most stressful tasks that a new graduate must face: a job interview.

Around 30 Riverland Community College students from varying disciplines put their resumes and cover letters up for review from experts in different industries on Wednesday morning. Dressed in uniform, business casual attire, the students walked into a lecture space where professionals from industries such as commercial truck driving to agricultural sciences to law enforcement, introduced themselves before going into the “interview.”

“I think it’s great and you learn from your mistakes,” said Storm Davis, a Riverland Community College criminal justice second-year student. “I learned a lot from my potential employers. I plan to work for the DNR as a conservation officer, or as a sheriff deputy.” 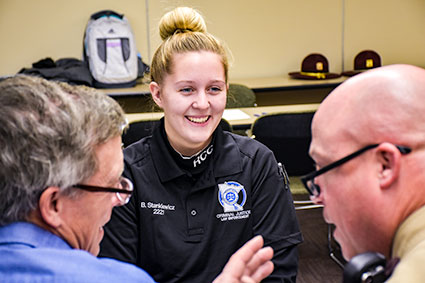 In this simulation, it was OK to make a mistake and constructive criticism would be given for students to take back and improve on before actually walking into a job interview with a potential employer. Whether it’d be taking dress code advice, speaking slower or adding more things onto a resume.

“I wish I would’ve had this opportunity before going out for a job of my dreams,” said Nick Schiltz, Riverland Community College agricultural sciences instructor and program coordinator. “Students have been really receptive and the feedback has been tremendous as they’re going for actual job interviews this spring or next year.”

For several intervals, students would sit in front of an interviewer and conduct themselves as if they were actually going through the hiring process, and then receive feedback once the mock interview was over. Schiltz said that this was the first year that the event was open and expanded to all disciplines, and foresees this mock interview session to be an ongoing resource for individuals wanting to practice before going out for a real interview.

“Students were asked to have a resume and cover letter written for a class and then worked on in a workshop setting,” he said. “It’s truly fascinating to see them grow by seeing them interviewing and looking at jobs.”

In this instance, law enforcement students had a chance to sit in front of two individuals (one who is an actual officer with a law enforcement agency and another professional from another industry). Al Schuda, a Riverland Community College criminal justice instructor, stated that this type of interview format was common for those entering into the law enforcement field.

With this experience, students now have further insight into what to expect when going in for an interview at a local law enforcement agency. 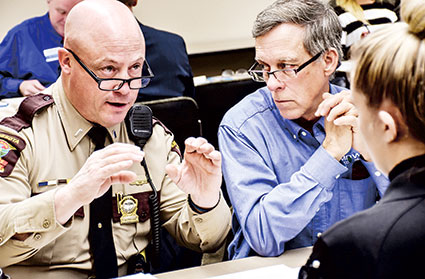 “Citizens specifically get asked to sit in on the panel to get a better overall perspective on a prospective candidate,” he shared. “Perspectives may be different from a citizen and a police officer during the hiring process, and helps us choose the best candidate for the job.”

This was the case for Susan Irvin, a Riverland criminal justice student in her second year. She was interviewed by Lt. Dan Lewis from the Minnesota State Patrol and Steve Lawler of the Mower County Soil and Water Conservation District. Although they were interviewers from two different backgrounds, Irvin was given feedback on her interview.

“It was a great experience and a great opportunity that Riverland put on for us,” she said. “It definitely helped me prepare for my next interview. When you go into the real thing, they don’t tell you how you did or what to work on for next time.”

Lyle-Pacelli looking into future of football; Low numbers affecting how the program could look

After a season that saw the football team battle dwindling numbers, Lyle-Pacelli is hoping it will still be playing football... read more