The queen takes her morning throne 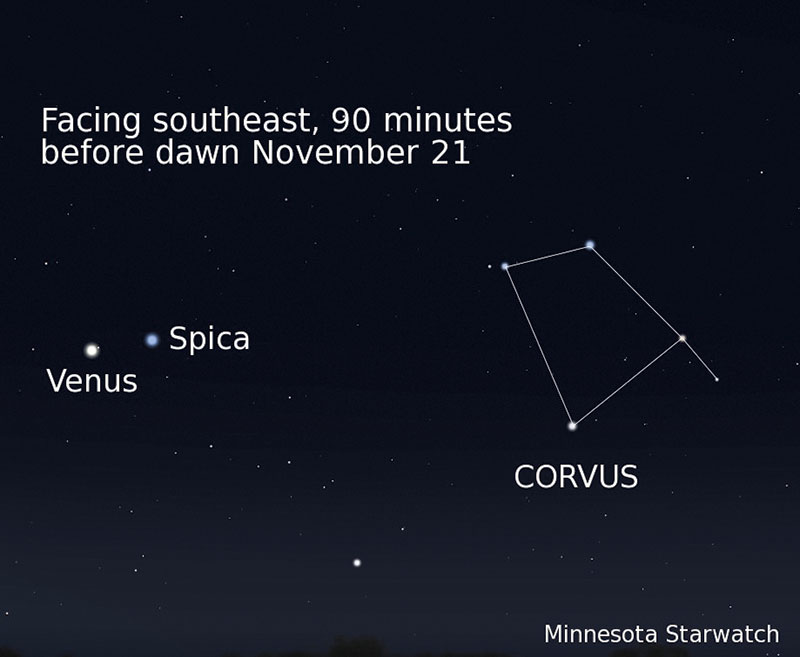 In November the skies get seriously dark. That makes it all the easier to watch Venus stage a reappearance in the predawn sky. Venus recently fell into the sunset as it began its latest trip between Earth and the sun. Now, having completed that trip, it’s climbing in the morning sky as it swings away from the sun’s foreglow.

Starting mid-month, look for the queen of planets low in the east-southeast an hour to 90 minutes before sunrise. As it climbs it comes close to Spica, the one bright star in Virgo, the maiden. Virgo is home to the Virgo Cluster, an assemblage of more than a thousand galaxies spread over a wide expanse of sky. It’s also the closest large cluster of galaxies to the “local group,” which includes our Milky Way and the Andromeda Galaxy.

Just west of Spica, look for the relatively obscure constellation Corvus, the crow. The crow’s four main stars form a lopsided quadrangle, making Corvus, in a way, a rather comical constellation.

Above and east of Venus and Spica shines Arcturus, the brightest star in the northern hemisphere of sky. It anchors the kite-shaped constellation Bootes, the herdsman.

The Leonid meteor shower peaks on the mornings of the 17th and 18th. It probably won’t be spectacular, but if skies are dark and you can manage to be out well past midnight, you may see 10 to 15 meteors an hour.

If you’re out in the evening, Mars still dominates the southern sky. A first quarter moon visits the red planet on the 15th, then hurries eastward to join the winter constellations as they begin their annual return. November’s full beaver moon rises the evening of the 22nd—Thanksgiving. The next night, it rises close to Aldebaran, the eye of Taurus, the bull. It then travels the night sky with Aldebaran and the Hyades star cluster, which outlines the face of Taurus.

In astronomy news, University of Minnesota astrophysicists were part of an international team that solved a centuries-old mystery. In 1670, a star suddenly flared up in the middle of the Summer Triangle of bright stars, which is now up in the southwest after nightfall. The star faded away, though, and nobody knew what it was.

As it turned out, the spectacle was the collision of a white dwarf star and a brown dwarf star. A white dwarf is what the sun will become at the end of its life: a small, dense star with powerful gravity. A brown dwarf is what astronomers call a failed star. Brown dwarfs have between 10 and 80 times the mass of Jupiter, but not enough to ignite the thermonuclear fusion that makes stars shine. The two stars once orbited each other, but they got too close, then merged and spewed out debris—mostly the shredded remains of the brown dwarf. The team is the first to detect a collision between these two types of stars.