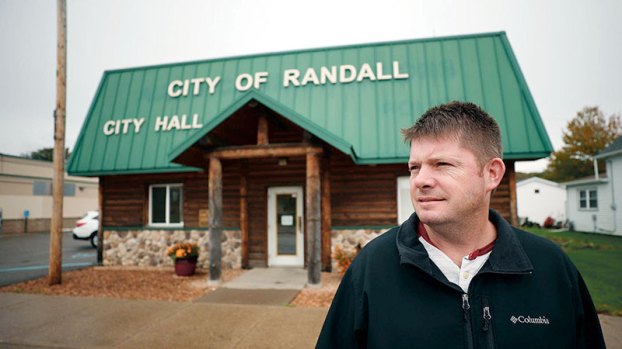 For decades, the city of Randall, Minnesota, just northwest of Little Falls, relied on two wells to supply drinking water to its 650 residents.

Then, in 2015, a routine water sample the city sent to the state health department tested above the safe drinking level for nitrates. State health officials asked for a second sample, then delivered the bad news.

“They actually showed up at Randall City Hall and directed us to discontinue us using that water source immediately,” said city manager Matt Pantzke.

The city switched to using its second well. But Pantzke said it needed a long-term solution.

“For us here, having one source of water for a community of 650 just isn’t OK,” he said. “If something happened to that well, it would leave every resident without drinking water.”

And Randall is not alone: A new report from the national nonprofit Environmental Working Group says the problem of nitrate contamination in drinking water is hitting small, rural communities like Randall the hardest — and they are the ones least able to afford treatment costs.

Randall addressed the problem by digging a new well at the same location, but in a deeper aquifer. The new water source doesn’t have nitrate, but it does have naturally occurring minerals, such as iron and manganese. So the city had to build a new treatment plant to filter them out at a cost of $1.37 million.

Nitrate contamination is a growing problem in parts of Minnesota. Drinking water with excessive levels of nitrate can cause health problems including a life-threatening disorder in infants known as blue baby syndrome. Contamination can come from different sources, but the biggest source is fertilizer and animal manure applied to farm fields.

“These rural communities are often surrounded by farmland, and so they have a much higher concentration of farm runoff getting into their drinking water system,” said Anne Weir Schechinger, a senior analyst of economics for the Environmental Working Group, and one of the report’s authors.

The report looked at data from public drinking water systems across the country from 2014 and 2015. It found that 1,700 U.S. communities have nitrate levels at or above 5 milligrams per liter — half the federal safe drinking water limit — and two-thirds of those have no treatment system to remove the nitrate.

Schechinger said the good news is that those communities still have time to reduce the volume of nitrates entering their water source before they hit the federal limit, to avoid having to install expensive treatment systems.

But how to do that has been a contentious question. So far, Minnesota has relied mainly on voluntary programs that encourage farmers to reduce their fertilizer runoff.

The state Department of Agriculture is working on new mandatory rules for nitrogen fertilizer use, but the regulations have been controversial among farmers.

Nitrate contamination in the aquifers that supply drinking water tends to build over time, said Tannie Eshenaur, planning director for drinking water protection at the Minnesota Department of Health. On the flip side, reducing those levels also takes years, she said.

“For these smaller communities, it’s a challenge — not only because it takes so much time to resolve, but they often don’t have control over the areas or the land uses that supply their wells,” Eshenaur said.

And removing nitrate once it’s in the water is expensive. According to the Minnesota Department of Health, eight community systems that serve a total of 50,000 people are now treating water for nitrate. That’s up from six systems serving 15,000 people in 2015.

The city of St. Peter installed a reverse osmosis system in 2011 because of rising nitrate levels in its groundwater.

The system added an extra cost to residents of $2 for every thousand gallons of water treated, said Pete Moulton, the city’s public works director.

“The options are fairly narrow,” Moulton said. “Our community decided to be proactive and just treat it. But in other communities they may not have that option. So it isn’t somebody else’s problem. It’s everybody’s problem.”

When the city of Randall needed to build the water treatment plant for its new, deeper well, it received financial assistance from the state Public Facilities Authority for the project. But Pantzke, the city manager, said residents’ water bills still went up about $10 to $12 a month, and will go up another $6 a month next year.

“It’s a lot for any community,” he said. “There was some concern. But there’s been some peace of mind too, because there were people that for a few years didn’t trust the water source and were buying bottled water.”

Now, he said, many of those residents have gone back to drinking their tap water.

CAPE CANAVERAL, Fla.  — A scrawny dwarf planet nicknamed the Goblin has been discovered well beyond Pluto. A round frozen... read more