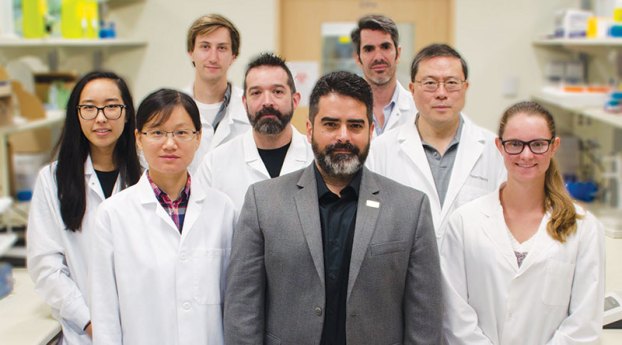 The research team in the Cancer Cell Biology and Translational Research Lab at The Hormel Institute, led by Dr. Sergio Gradilone (middle front) recently published its discovery about mechanisms that control the spread of cancer cells – which may lead to new therapies for bile duct cancer – in the high impact journal, Hepatology. Photo provided.

Scientists at The Hormel Institute have published breakthrough cancer research that throws new light on how malignant cells may be controlled  – information that could lead to new therapies for bile duct cancer, according to a news release issued on Monday.

The research by Dr. Sergio Gradilone and team in the Cancer Cell Biology and Translational Research lab at the institute was published in the high impact journal Hepatology. Gradilone led the research team that included Drs. Adrian P. Mansini, Estanislao Peixoto and researchers Sujeong Jin and Seth Richard.

“This discovery is critically important because it uncovers novel information on fundamental, ciliary-dependent mechanisms controlling the spread of malignant cells, and provides the foundation for novel anti-cancer therapies,” said Gradilone, who joined The Hormel Institute in October 2014. 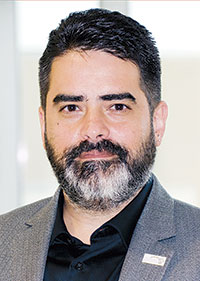 “This research opens the door to a potential future treatment that limits the progression of this cancer that impacts the liver. Our goal is to stop cancer’s progression and life can be protected,” he added.

Key findings presented relate to the ciliary-dependent regulation of cell migration and invasion, important characteristics tumor cells exploit to grow and metastasize to other parts of the body.

The primary cilium is a hair-like structure protruding from the cellular membrane and is considered the cellular antenna. Gradilone’s group previously described how these antennae are lost in tumor cells. The research team now found the cilium can inhibit the spread of tumor cells and identified the molecular mechanisms where a protein known as LKB1 acts as a hub, regulating the external signals received by the cellular antenna.

Cholangiocarcinoma, or bile duct cancer, is a lethal form of liver cancer. No effective pharmacologic therapy exists. The bile ducts are a series of thin tubes that go from the liver to the small intestine. Bile duct cancer is somewhat rare but the actual number of cases is likely to be higher, because these cancers can be hard to diagnose and some might be misclassified as other types of cancer. About 8,000 people in the United States are diagnosed with the cancer each year. Survival rates vary by location of the tumor, but 5-year survival for early stage bile duct cancer is about 15-30 percent, with 5-year survival for late stage bile duct cancer at about 2 percent.

Interestingly, the loss of primary cilia has been described in other malignancies, including breast, pancreatic, kidney, prostate, and lung cancer, among others, increasing the significance of the institute’s studies.

Next steps for this research are to further test the natural compounds able to regulate LKB1 in order to translate the discovery to patients, according to the research team.

Law enforcement across Minnesota reported 4,610 seat belt and 140 child seat citations during the two-week Click It or Ticket... read more