March of Health; For second consecutive year, Sumner earns award for being one of the healthiest schools in nation 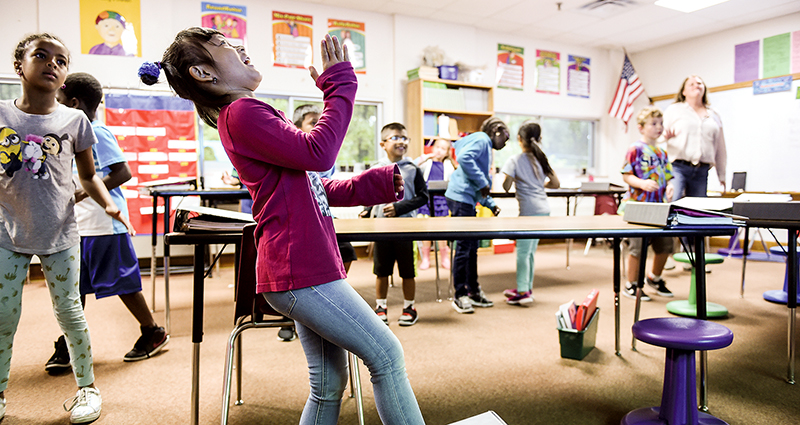 A sound body and sound mind are things that Sumner Elementary School looks to help students and teachers build during the school year, and their efforts have paid off.

Sumner Elementary was one of only two schools statewide to be honored by the Alliance for a Healthier Generation.

Last year, Sumner was recognized with the bronze award for being one of the healthiest schools in the United States and was one of 460 schools nationwide to be honored for 2018.

“We have very active leadership here (at Sumner),” said Principal Sheila Berger. “To have them get acknowledged for their work is very gratifying.”

Grapes are just some of the healthy treats available at the fruits and veggie bar.

For the last several years, Sumner Elementary has been making efforts to improve wellness and active lifestyles at the school level. There were initiatives that qualified Sumner for the bronze award, and also newer changes that helped them qualify for the silver.

Those examples included opting out of rewarding students with candy, handing out water bottles and using fill up stations around the school to increase water consumption, and increasing playtime and movement during inclement weather. Two grants through SHIP of Mower County, replaced drinking fountains with hydration stations where students were able to refill their reusable water bottles that were given to them at the beginning of the year.

Others also had put together mini breaks, where students do yoga poses and other activities to get re-energized before getting back to studying. These breaks have helped students stay focused in class and also decreased the number of office referrals, according to a previous story.

Also happening at Sumner Elementary was the approval of several grants that helped them with healthy snack options and before school movement programs such as the $1,000 grant from Action for Healthy Kids, and a $1,400 grant from Austin Public Education Foundation for a new “calming room” inside their school to help furnish it for students in need of a quiet space. 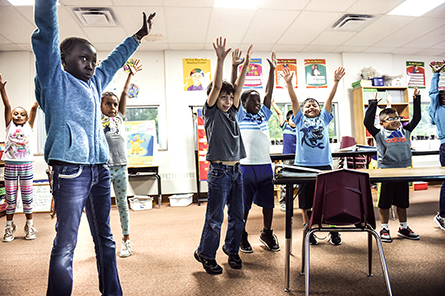 Sumner Elementary second-graders reach for the ceiling during an exercise break Tuesday morning.

Tina Henely, technology integrationist and one of the educators who was involved in the grant writing for Sumner’s healthier school initiative, mentioned that next Tuesday, Sept. 25, families will be able to participate in a fitness night with their children and are encouraged to workout together.

“We’ve made a lot of big changes to improve both student and staff wellness,” she said. “We want them to be a healthier, successful person in the long run, and all those things come with healthier habits.”

Students weren’t the only ones taking steps for healthier lifestyles. Staff also drink only water in front of students, participate in weight-loss and fitness challenges and, on Wednesdays, bring in healthy food options for potlucks together. Educators also made a formal statement that recess or physical education time would not be taken away from students as a form of “punishment” if someone were to misbehave. 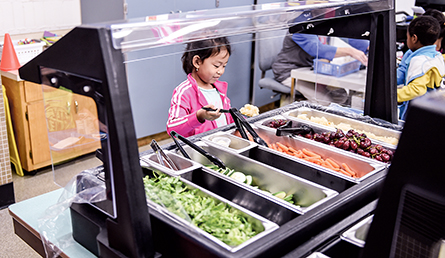 Birthday treats, like cupcakes or cookies, were discouraged. Rather, the school  asked parents to consider bringing in a non-food item like little toys, pencils, or other activities. If it were to be a food-item, it needed to be from a United States Department of Agriculture approved list for healthy snack options like small amounts of baked potato chips, granola bars and yogurt.

The response from parents, Berger said, has been relatively leaning toward the positive.

“I think for some it’s shocking,” Berger said. “It’s not typical to them that a school is doing this.”

Sumner Elementary was recognized for silver after meeting certain criteria on the needs assessment, which also had previously qualified the school for their bronze award that was earned last year.

“It’s something to strive for,” she said. “It’s kind of the hiccup in the ordeal, or a plateau.”

However, Berger stated that the school would consider applying for the gold award. They would just need to meet with district officials and work together in achieving those goals.

In the end, the district would continue to make progress on their initiatives for a healthier school, whether they were acknowledged or awarded recognition.

“It’s about educating the people we serve,” Berger said. “We absolutely want to continue to make changes to practices and procedures. It’s about baby steps for a healthier staff and students.”