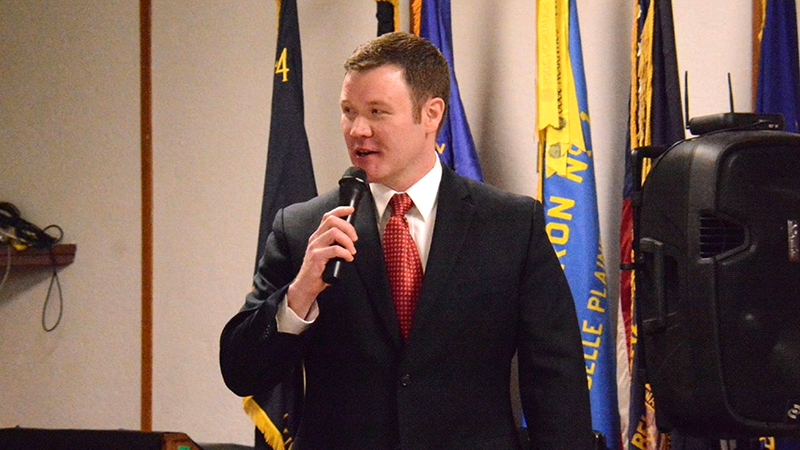 Republican Minnesota Attorney General candidate Doug Wardlow spent time campaigning in Southeast Minnesota on Tuesday. Like other candidates, he is trying to get voter support with the primary elections just two weeks away.

“The reason I’m running is to take the politics out of the office of Attorney General’s office and focus on Minnesotans and standing up for peoples rights,” he told the Herald.

A native of Eagan who currently resides in Prior Lake, Wardlow graduated from Georgetown University. He was a law clerk for Minnesota Supreme Court Associate Justice G. Barry Anderson and is a constitutional lawyer for the Alliance Defending Freedom. From 2011-13, he served in the Minnesota House of Representatives, sitting on the Judiciary, Civil Law, and Taxes Committees.

He was the first Republican to announce his candidacy for Minnesota Attorney General.

Wardlow discussed what he believes are some of the biggest legal challenges facing Minnesota.

“This state is overregulated, and most of these regulations are made by unelected bureaucrats,” he said, citing Minnesota’s Buffer Law as an example. Under the law, landowners are required to establish a vegetation buffer of up to 50 feet along lakes, rivers and streams and buffers of 16 ½ feet along ditches with the goal of protecting waterways from runoff and pollution. The law allows counties and watershed districts to fine landowners $500 per parcel if they fail to establish the buffers.

Wardlow decried the law as “unconstitutional taking of property without just compensation.”

Wardlow will be facing former state senator Bob Lessard and retired realtor Sharon Anderson in the Republican primary. Neither, he said, are practicing attorneys.

He also pointed out that DFL candidate Keith Ellison, who has been endorsed by Sen. Bernie Sanders, I-Vt., and former Vice-President Walter Mondale, is not currently authorized to practice law because his license is on voluntary inactive status.

“Minnesota needs an Attorney General that will take the politics out of the office and stand up for peoples’ rights, lift the burdens off job creators and keep our communities safe,” Wardlow said. “That’s what we’re going to do.”