Dr. Gianrico Farrugia will take the helm when Noseworthy retires at the end of this year.

Under Noseworthy, Mayo has excelled financially and it has routinely been named the best hospital in the country — all while the health care industry has faced significant changes resulting from the Affordable Care Act.

Farrugia says Mayo is in a strong position as he takes over.

“Under Dr. Noseworthy’s leadership, we’re helping more patients than ever before and doing it better than ever before,” Farrugia said. “And it’s certainly an honor to be leading such an iconic institution made up of such extraordinary individuals.” 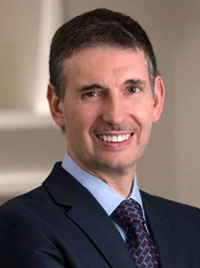 Farrugia is a native of Malta but is well-known to the Mayo community. He has led Mayo Clinic’s Jacksonville campus in Florida since 2015. He has been a physician in gastroenterology and hepatology for 30 years and served as the director of a Mayo Clinic center focused on leading-edge genetic technology.

Farrugia said he takes over at a time of great upheaval for the health care industry nationally. To succeed, he said, Mayo will need to continue to find ways to adapt — all while sticking to its pledge to “put the patient first.” That includes continued investment in research and education.

“The next step will be to continue to partner with like-minded institutions, organizations, even the government to make sure that the next generation of health care is affordable to even more patients and at the same time gives us better safety, better outcomes, better quality of care,” he said.

Noseworthy has led Mayo since 2009 — his retirement comes roughly a decade later. Most Mayo CEO’s serve for about ten years.

A neurologist by training, Noseworthy says he’s most proud of transforming Mayo’s corporate and operating structures. He took over a holding company with sites in Arizona, Florida and across the Midwest, each with different budgets, processes and strategies, and melded them into a single operating company.

“And that’s allowed us to be more successful — see more patients, do it better, be a thought leader, transform health care both for our local regions such as Minnesota but also across the country and the world,” Noseworthy said.

The most challenging part of the job?

“I think it’s communication: what you’re trying to do and why,” he said.

Noseworthy has been the face of Mayo through some monumental and controversial changes. He spearheaded the multi-billion dollar Destination Medical Center economic development project, which is meant to transform Rochester and southeast Minnesota. Mayo took flack over the consolidation of some clinical services outside Rochester. And Noseworthy raised concerns when he appeared to tell employees the company preferred commercially insured patients over those on lower-paying government plans.

As Mayo continues to expand nationally and internationally, Noseworthy says he has stressed the importance of communication as Farrugia takes on the top position.

Austin Just For Kix director Marny Rohr attended the 2018 Just For Kix annual Convention with over 170 Just For... read more