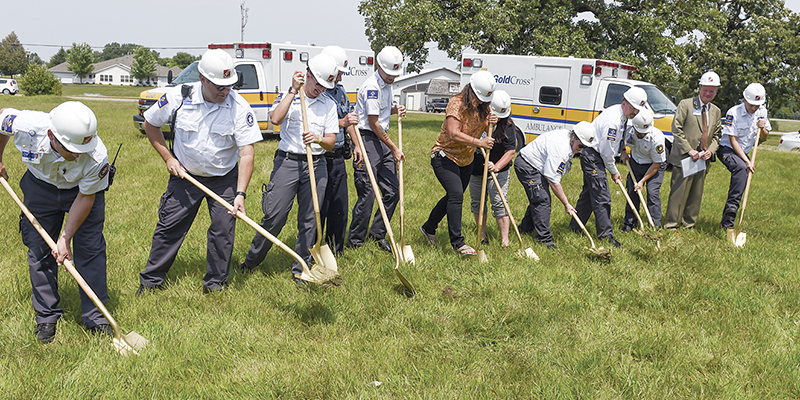 Gold Cross, Mayo Clinic’s ambulance service, broke ground on Friday afternoon and started its construction phase of a new $2.2 million station to base ambulances and staff in the Austin area. The project’s completion date was expected to happen in January 2019.

The future facility is being built at 18th Avenue and 5th Street NW—west of the cemetery and east of Hy-Vee gas station, next to Schieck Dental—and represented the collaboration between the City of Austin and Mayo Clinic and is projected to be about 7,600 square feet.

“As Austin continues to grow and corresponding needs for emergency medical services, Gold Cross will be able to respond to increasing call volumes and continue to serve the needs of the patients into the future,” said Kristopher Keltgen, operations manager/facilities project lead for Gold Cross in Austin. “This project represents our commitment to best meet the current and future needs of patients and visitors to the region who may require emergency medical services.”

“The scale and scope of the project will allow us to grow for the future and meet other possible urgent needs, such as a command center in the event of a community-wide, large-scale emergency such as a weather-related event,” Keltgen said. “This structure will be cost-efficient and feature environmentally and sustainability-friendly operations and will involve several local/regional contractors and building materials/supplies.”

Among those who were present for the groundbreaking was City Administrator Craig Clark, who was pleased with the procession of the new facility after being approached by Gold Cross several months ago about the proposed project. 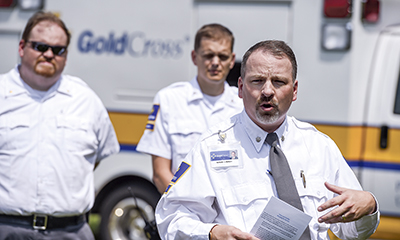 Kristopher Keltgen, operations manager/facilities project lead for Gold Cross in Austin speaks prior to the groundbreaking of the new Gold Cross facility in Austin. Eric Johnson/photodesk@austindailyherald.com

The need, the growth

Austin previously had Austin Ambulance Services before Gold Cross purchased them in 1996. Since then, the ambulance services were housed in different parts of town such as the old fire hall, before settling at 1010 W Oakland Avenue, which is in a residential area.

However, the new facility that’s being built for Gold Cross was part of an ongoing plan to invest in all Gold Cross stations, according to Chris Rustad, Gold Cross administrator, and acknowledged that the current site of Gold Cross in Austin was not practical.

“This is really about collaboration, and we play a vital role in first response,” Rustad said. “We have actually been upgrading our facilities throughout the area”We knew we needed to make the necessary investments. …it’s great that Austin and Albert Lea will have modern facilities.”

The location where the facility is being constructed was ideal because of the access to the interstate and being able to meet the needs of surrounding rural communities as well, Rustad added.

There was also a demonstrated need to accommodate the growing size of Austin, Keltgen said. On average, Gold Cross’ call volume reached about 4,500 calls per year.

Having a facility in Austin shouldn’t deviate from expected response times for paramedics during an emergency situation, he said. Also, it was projected that the new facility would add upward of 12 to 14 staff members between both Albert Lea and Austin within the next several months and having three crews at different points of the day.

“It’s nice to have highway access and provides services to all parts of the area,” Keltgen added.