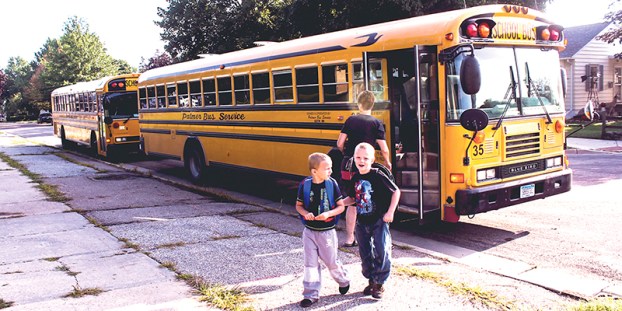 Woodson Kindergarten Center students hop off the morning bus during their first day of school on Monday. Statewide, districts have experienced a shortage in the number of bus drivers, impacting communities. Hannah Yang/hannah.yang@austindailyherald.com

The wheels on buses in school districts haven’t been going “round and round” because of a statewide and nationwide shortage of drivers.

Decreasing number of school bus drivers have led to a statewide shortage, according to the Minnesota School Bus Operators Association (MSBOA). The MSBOA released a 2016-17 report, which stated that nearly every school district in Minnesota faces a bus driver shortage, with a varying degree of need. Some smaller districts need “a handful of drivers while some need more than 100,” according to the report.

Austin Public Schools was not exempt from the nationwide trends. Palmer Bus Services, which APS contracts with for busing services, has roughly 50 bus drivers employed with them. Although not all 50 drivers are out working at the same time, the shortages have affected the company, said Director Heather Felten, and Palmer Bus Services is hiring and recruiting.

“I would need … I’d be sitting good if I have three more full-time drivers driving every day morning, and night,” Felten said. “I enjoy driving myself, but I also need to be here in the office. We’ve been doing a lot of recruiting through the summer for summer school and 45/15 scheduling. So, we’ve put it out there.”

School districts are required by state law to provide transportation for all students who live more than two miles from their school.

The shortage hit many districts hard, including Southland Schools District in Adams, which is struggling to recruit new bus drivers to help out with the routes. Transportation Coordinator Jenny Ellefson said she started her position with Southland in October 2014. Since then, the district went from having 10 bus routes and now they’re down to eight.

They originally had nine bus drivers, but one retired at the end of the school year, according to Ellefson. Despite given prior warning in February about the pending retirement, the district still met challenges in finding interested individuals in taking on a route, the posting went unanswered and unfilled.

“We started looking for another route driver,” she said. “After newspaper, website and also some recruiting through word of mouth, we kept looking for someone. It’s been months and we got nothing.”

With the school year now rapidly approaching, Ellefson had to make some tough calls, and took another look at the bus routes. Southland had to cut a route, and rearrange plans to accommodate students with eight bus drivers; four of whom work for the district, and four who are contracted out privately. Luckily, the routes planned avoided putting students on the bus longer than an hour.

“We were comfortable with nine drivers, every year is different,” she said. “Right now, looking at it, we are making this eight route district work. The arrangements I’m making looks like it’s going to be sufficient with eight. If we lose any other route drivers, then it’s gonna get more difficult, and I don’t know what I’d do.”

The Southland Schools District covers roughly 200 square miles, and even dividing the area by eight, some areas were more densely populated and some were more sparse with less stops. Part of Ellefson’s planning included looking at specific routes, and seeing if some would have to lengthen the drive.

“You have to think outside of the box,” Ellefson said. “The best thing we could try to do now is cut a bus route outside of our district pick-up. Instead of nine, we are going down to eight. …it has to be a matter of strategically shifting everyone so that route gets absorbed into other routes. Our main goal was to have students ride less than an hour, and trying to make that shift without having kids having to be on the bus for a very long time to make that work.” 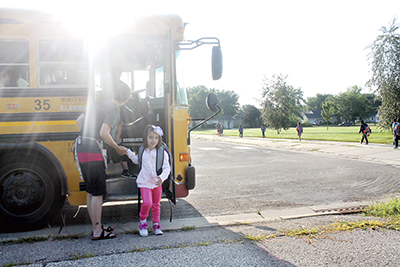 A young rider gets off the bus at Woodson. Hannah Yang/hannah.yang@austindailyherald.com

The need for more drivers

There were varying reasons why some districts may be experiencing a shortage. It could be retirement, or it could mean the changing landscape of having the interest in operating the school buses, or the schedule isn’t flexible for some, according to Ellefson.

“For most people, it’s having your day split from running a route in the morning, and after school route in the evening,” she said. “It doesn’t fit into everyone’s schedule, and that’s what we’re running into. I’ve asked people, and I’ve called people, asking ‘have you ever had thought about driving a bus route?’ and many would say ‘not really interested.’ I get that a lot.”

According to MSBOA, the shortage of bus drivers would require other district employees—like mechanics and administrators—to be pulled off their jobs to drive buses, and would likely result in fewer after school activities and canceled field trips.

For Austin, less bus drivers mean having to compensate by being in the office less to handle parents’ phone calls, according to Felten, and possibly having to push back transportation times for sports activities and extracurriculars.

“We will have to contact the school, and say ‘we have to push the time by half an hour,’” she said. “So, we can’t take softball to Albert Lea at 3 p.m., it’d be 3:30 p.m. The district has been great to work with and they’re understanding.”

If shortages were to get worse, then it’s possible that other staff members may need to fill in the routes such as teachers, according to Ellefson, but that’d be in the worst possible scenario and she’s looking to avoid having to resort to that measure in Southland’s case.

“I do have a few teachers who have a bus driver endorsement, but it’d be difficult to be in your classroom and it’s more difficult to work around it,” she said. “They’d have to leave immediately at the end of the day. We have a lot of kids who stay after school for help, and then our teachers wouldn’t be able to do that.”

To become a bus driver, a candidate would have to pass a federal Department of Transportation physical, undergo a pre-employment drug testing and ongoing random testing, pass a written test for CDL general knowledge, passenger endorsement and school bus endorsement, pass a criminal background check, hold a CDL permit for 14 days, complete behind the wheel training and pass a road test along with a pre-trip vehicle inspection.

However, there may have been a backlog of waiting and pending tests, which may have prolonged the application process to become certified, said Felten.

However, ongoing recruitment will continue. Ellefson stated that she hoped that anyone interested would consider becoming a bus driver to help transport students to school.

“For students, bus drivers are the first person they see in the morning,” she said. “To give them a ‘good morning, how are you doing?’ sets their mood for the day. We need to find people who can embrace that, find someone who has that drive and desire to make a kid’s life a good one. …I think it’s very rewarding. You could change the life of a little kid and being a good role model. Kids give their drivers thank you notes and goes to show that drivers are doing it more than the driving, but for the interaction with students.”

Austin’s Part II juvenile crime rate was the fifth highest in 2017, according to a report released by the Minnesota... read more