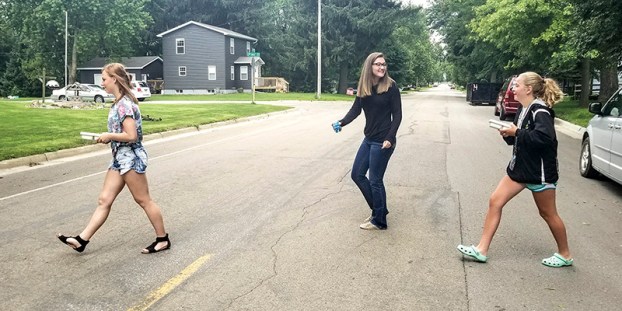 BLOOMING PRAIRIE — In today’s age of year-round sports, most high school teams spend their summers playing in summer leagues or staying sharp with regular practices. The Blooming Prairie girls basketball team certainly does those things, but the Awesome Blossoms have also found a way to give back to their community over the past couple of summers.

The Blossoms have volunteered their time to help out with the Meals on Wheels program in BP as a few players will come in when needed and drive meals to local elderly residents. BP head coach John Bruns said he’s always emphasized the importance of volunteering to his players and Meals on Wheels seems like the perfect chance for them to give back.

“We wanted to give back to a community that supports us with our fund raisers and our games,” John said. “Anytime you get kids together and they’re excited about it, it’s a neat team bonding opportunity for them. It may be a little bit different than going out for pizza, but I think it’s important for them to see what kind of impact they can have on the community.”

While some of the BP players are not yet old enough to drive, they will often team up with a player who can drive and take the route through town that takes about an hour or so to drop off meals. The players have learned what it’s like to donate time for a good cause, they’ve immersed themselves in the community and they’ve even learned to navigate their town a little.

“It also helps us know where all of the streets are,” BP basketball player Ashlei Alwes said. “It’s been pretty interesting. It’s fun getting to know the people and getting to talk to them. It’s nice to help.” 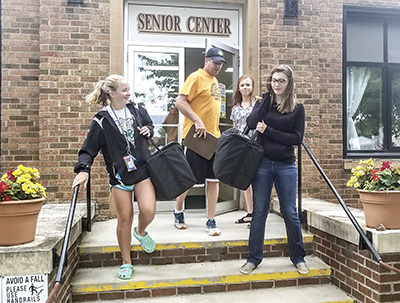 Maggie Bruns said the team has learned a lot about the value of giving back and they’ve also come closer together as a squad this summer.

“Some of (the people we deliver to) don’t get many visitors, so it’s nice to be able to have conversations with them,” Maggie said. “As a team, bond in a different way from sports when we’re together helping someone else.”

Bev Willert, who works at the BP senior center, said she was thrilled to see high school students step up and help out their elders.

“Anybody that drives for the meals on wheels is very important for us,” Willert said. “The girls do so good at such a young age and it’s just marvelous. They go deliver and they’re back earlier than most of our delivery people. It’s quite a thing.”

John would obviously like to have a competitive basketball team in the winter season, but he’s glad he’s able to help his players learn life values as well as basketball skills while they’re part of the BP program.

“I think it’s important for them to know that they can make a difference, whether it’s just a couple of meals here, or if it’s something bigger,” John said. “They can do things for the people around them.”

The Austin Post 91 Legion baseball team lost a District playoff game to Winona by a score of 8-0 in... read more