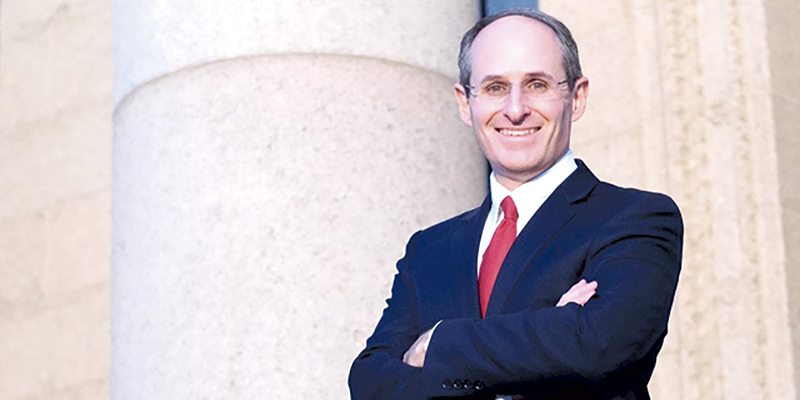 Minnesota Attorney General DFL candidate Mike Rothman began Friday in Albert Lea, followed by visits to Austin and Winona before ending the day at the Fillmore County Fair in Preston.

The former Minnesota Commissioner of Commerce, who has been running for Attorney General since November, is hoping to make an appearance at as many county fairs as possible before the Aug. 14 primary election.

“It’s my experience as being the state’s consumer watchdog and being a lawyer for 30 years that has me deeply interested in continuing to serve Minnesotans,” he told the Herald. “That’s why I’m running for Attorney General.”

Rothman grew up in Chaska, graduating from Chaska High School before attending college at the University of Minnesota Law School. He was a judicial law clerk for the Minnesota Court of Appeals and worked three to four years in the Minnesota Legislature before starting a law practice. He served as the Commissioner of Commerce for 7 ½ years, overseeing more than 20 industries in the state.

Rothman cited several issues that he intends to focus on if elected Attorney General.

“The opioid crisis is damaging our communities throughout Minnesota,” he said. “Everywhere you go it’s a serious problem. I will take action on day one against the opioid companies for their deceptive practices. I will also work with the healthcare industry to work on ways in which we can improve recovery. I also want to launch a statewide task force of the top experts in the state to tackle that issue.”

“Generic pharmaceutical costs are going through the roof,” he said. “They’re impacting everyone from senior citizens to our families and we need to take action against the generic companies for what is anti-trust behavior. I think it’s important for us to look at how it’s priced, why drug prices are not transparent, and make sure we can get better costs there.”

“Senior citizens are in a serious situation when you talk about financial abuse and exploitation,” he said. “As Commissioner of Commerce, I made seniors a top priority to protect from scams, including Ponzi schemes and lottery scams. Financial abuse is happening everyday and as Attorney General, I will make protecting senior citizens a top priority.”

“I grew up in Chaska; I understand rural communities,” he said. “My goal is to make sure that we will stand strong for issues popping up in rural communities. For example, as Commissioner of Commerce, I stood strong to make sure we have a fair market place, such as in the energy sector. One of the things I did was save Minnesotans over $1 billion.

Most of that was making sure that our utility rates were low, and that would be one of my priorities as Attorney General while making sure we can continue to build a nice clean energy economy in some fashion.”

Rothman also stated that he worked on the Biodiesel Standard for Minnesota to ensure low biodiesel prices for rural Minnesotans.

“I’m ready to protect Minnesotans on day one,” he said. “There is no other candidate in this race that has statewide experience as a public officer like I have, from border to border, town to town, farm to farm. There is no other candidate that has the combined experience as the state’s top consumer watchdog, plus my experience of 30 years of being a courtroom lawyer, that can stand strong for the legal rights of Minnesotans. We need to make sure the people’s lawyer stands strong for protecting our rights and I have the greatest amount of experience, having overseen all of these industries. That’s why when it comes to Aug. 14 and people are thinking about who they’re going to vote for, it’s going to be and should be the person that’s most ready to protect them.”