Field day shows off use of cover crops

For more than 19 years Tom Cotter and his family have made extensive use of the practice of planting cover crops to ensure a healthier soil for his crops.

On Tuesday afternoon, farmers from both Minnesota and Iowa, along with other people in the ag industry, converged on the Cotter farm to see and hear first hand from Cotter the positive effects cover crops have had on his farming operation as well as insight into the practice itself.

Over 90 people took part in the event. 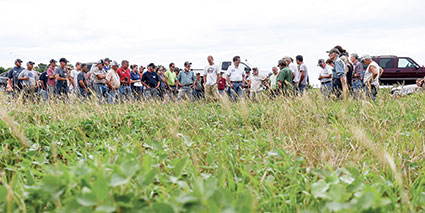 Visitors listened to presentations and took a trip to Cotter’s fields as well as those of another nearby farmer, Jon Jovaag.

For Cotter, it was important for farmers considering the move to organic farming and the planting of cover crops to see it first hand.

“That’s where they realize they can take it to their field,” Cotter said.

The Cotter family has a long history of conservation. In 2016, Tom, along with his father, the late Michael Cotter, were honored by the Mower County Soil and Water Conservation District with the Outstanding Conservationists Award. In 2017, Tom was honored as a National Wildlife Federation Cover Crop Champion.

The idea of cover crops is to inject health back into soil by building it up through a number of practices. The crops help increase soil-water capacity, reduce erosion, improve soil structure and health, suppress seeds and break pest cycles.

Cotter also grazes his cattle on the cover crops deep into the fall.

“It’s a whole big cycle,” Cotter said. “We’re trying to do all aspects right rather than just two right and two wrong.”

Jovaag has also seen a positive impact in his operation. Jovaag and his family decided to make the switch to organic farming three years ago. A farmer must work the land organically for three years before actually selling an organic crop.

Jovaag said he started small to ensure it was a viable change over.

“That’s why we started small — to learn,” Jovaag said. “The first few years were a steep learning curve.”

For Jovaag, it was a little easier given his background. His father, Avid Jovaag, was also known for trying different things to try and get a better product.

The slide to organic had an extra twist for Jovaag in that he only returned to family fairly recently in 2011. Still, Jovaag has seen the positive returns of organic farming and cover crops.

“It’s been going really well,” he said. “Overall I’m pretty happy with it. We’re doing what we can to get a system that works for us.”