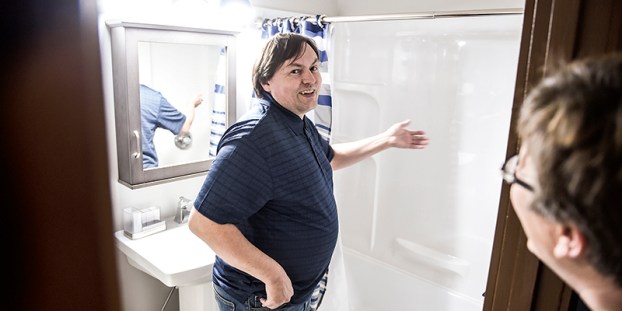 Daniel Johnson smiles after seeing his new bathroom, shown to him by Gina Grundmeier during the Pay It Forward reveal Friday evening. Eric Johnson/photodesk@austindailyherald.com

When Daniel Johnson heard he would be the recipient of the fifth Pay It Forward bathroom remodel, he admits he wasn’t sure why he was chosen.

But Gina and Todd Grundmeier – owners of T’NG Plumbing in Dexter and organizers of the annual effort — knew right away who they wanted to help.

The results of those efforts were realized on Friday, when Johnson was able to see his “bathroom” renovation — which, in fact, had turned into a full house remodel. 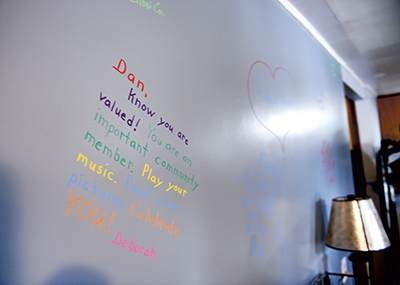 Notes of support were written on the wall in washable marker, welcoming Daniel Johnson into his renovated home. Eric Johnson/photodesk@austindailyherald.com

“Oh my — I didn’t think it would be anything like this,” said the 47-year-old security guard, stunned when he walked into his home for the first time.

The bathroom had a full bath, shower, fixtures, and flooring – but that was just the beginning. His bedroom, kitchen and living room also had new flooring, paint – and the kitchen had new cabinets, granite counters, dishwasher and new stove.

There was still more: The volunteers replaced his furnace and water heater and added air conditioning, which he never had before.

“He’s just a hardworking guy, a guy who pays his bills, but has some plumbing issues he just can’t afford to fix,” Gina said upon his initial selection.

His sister, Mary Lange, who nominated him for the work, could hardly speak on Friday when she saw the results. 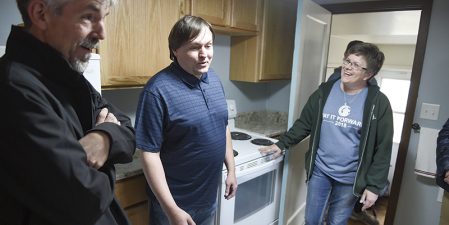 Daniel Johnson checks out his new kitchen during the reveal for the Pay It Forward program Friday evening. Eric Johnson/photodesk@austindailyherald.com

“I knew they were doing more than the bathroom – but I never thought anything like this,” she said, wiping her tears.

Kevin Haney of Haney’s Handyman Service, one of the donors/contractors, said he always finds the week helping others humbling.

“You take for granted what you have and then you see” someone like Johnson, who only had one source of running water in his home, “but he always kept up a happy outlook,” he said. “It is absolutely my pleasure to help.”

“Dan is part of the good, hardworking people who sometimes just need a boost,” he said. “Doing something for a deserving person — it’s fulfilling.”

Gina Grundmeier had her own bout of tears as she watched Johnson survey his new home.

“It’s amazing when a bunch of strangers come together to do something like this,” she said. “It says, ‘You matter,’ it’s that sense of value.”

Johnson was still in awe of what had been done. The work began Monday and during that time, the Pay It Forward organization kept him in a hotel for a free stay and meals.

“It has been such a godsend,” he said, thanking everyone who worked for him. “I was praying on it. It’s been such a great team of people; I give them all my heartfelt thanks.”

The Pay It Forward effort began after the Grundmeiers lost many of their belongings in a fire. They were stunned with the outpouring of support they received and wanted to give something back.

Since the first year, they have helped gather donations of labor, funds and materials to help someone who may have suffered a life-changing event – or, like Johnson, was a hardworking person who supported others, but would never ask for something for himself. 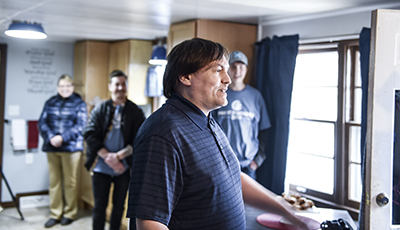 Contractors who helped with the renovation of Daniel Johnson’s home:

Space-aged Banjo What can you say about a superhero based around a banjo? Well, the only way to find out... read more