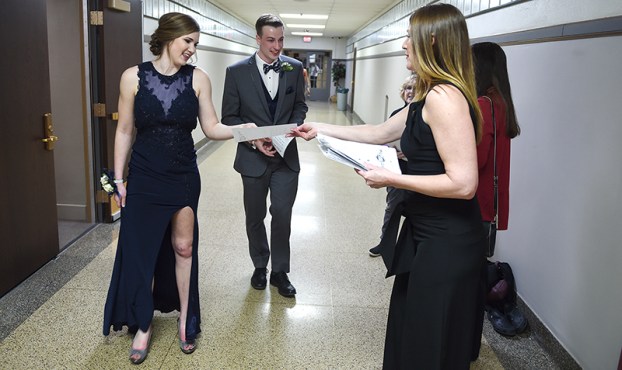 Austin High School prom-goers each got a letter from second-graders wishing them a fun evening, but a safe evening. Eric Johnson/photodesk@austindailyherald.com

Austin High School prom goers Saturday night had a lot of things on their minds, all leading up to what they hoped was a perfect night. But the city’s second graders along with some third graders gave them one more thing to think about: safety.

For the second year, letters written by the elementary students were handed to the couples as they finished the grand march. Each note wished the students a fun night, but they also hoped they would make good decisions and have a safe night.

“I think the amazing part was just their expressions when they started reading the letters,” said Bill Spitzer, P & I Coordinator for the Austin Positive Action Coalition. “They were amazed someone so young would have so much of a kind word to say that they wanted them to be safe.”

Over 330 letters were handed out and for Spitzer, a lot of the enjoyment was seeing how the older students handled the letters.

“I think the coolest thing I saw was students go around and share what their second-grader said,” he said. “It was kind of a competition.”

The idea came to Spitzer when he worked in the St. Charles School District. He said he hopes the idea has a reciprocal affect for the students.

“In fact, one of the things I want to do is start this being reciprocal,” Spitzer said. “Have those students go down to the second grade, whether it’s too read a story or just show we care for you as a second-grader. Show that it’s important to have role models.”

That’s an aspect Spitzer thinks can help build this relationship. Many times, older students don’t know what kind of impact they have on younger students.

It’s why good decisions by the older students can be so important, not just for their own wellbeing.

“A lot of time I think they think it’s just a sport they are playing, or a play they are in,” Spitzer said. “I don’t know if they fully understand the full scope that students look up to these older students. They watch what they do, they mimic their behaviors and decisions they make. There are a lot of eyes watching them.”

Drugmakers push back against lawmakers’ calls to tax opioids