Super Girl: Jessica Cabeen is a driving force of positivity in education 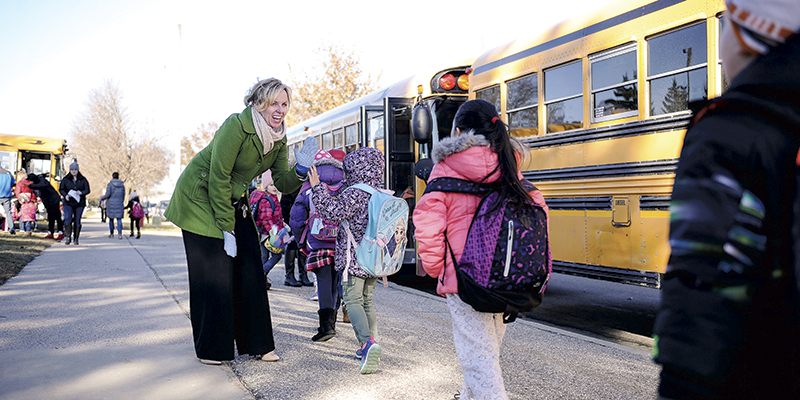 As Woodson Kindergarten Center students head to their buses, principal Jessica Cabeen is always sure to be there giving high-fives and hugs.

By her own admission, Woodson Kindergarten Center Principal Jessica Cabeen has always been “a square peg, round hole-type of girl,” she said.

The more visible signs might be seen in the Super Girl outfit she wore in the annual Woodson Halloween Parade or that  shade of (hot) pink spray dye she wore in her hair for the day when her kids met their goal during a penny collection as part of Paint the Town Pink.

And, on this day, Cabeen greets her visitor with her signature enthusiasm, and wearing a pair of shoes that say “Smi” on the right, and “le” on the left.

But if you think these are just light-hearted affectations, think again. Cabeen is dead serious about educating children. And taking a different path is just one way Cabeen has distinguished herself. It comes as no surprise that a Better Leaders, Better Schools podcast site headlines her guest blog information with the headline, “Unconventional Leadership.”

Cabeen, 41, is increasingly looked to as an educator of note not only in Austin, but across the country.

Education always played a major role in Cabeen’s life. Her dad was a guidance counselor; her mother, a speech pathologist. Jessica Cabeen helps students get into their winter coats as the school begins wrapping up the day. Eric Johnson/Austin Livig

Later, she was determined to combine her nurturing side with her love of music, with a music therapy career — an unusual path at the time.

While some parents might have urged her to follow a traditional path, her dad urged her to use her best gifts.

“My dad would say, ‘If this is what you want to do, I’ll make sure you get whatever you need to get there,’” she said. “He really cultivated my interest.”

She earned her degree in music performance and psychology from the University of Wisconsin-Eau Claire; afterward, she worked at a children’s home near Dixon, Ill., and at Opportunity Village in Clear Lake, Iowa.

After five years she landed a position as a music therapist in St. Paul Public Schools — the first time she worked with students in a school setting.

She worked with the autistic, the emotionally disturbed, and children with fragile medical conditions. Her recollection of that time is filled with affection for both the students and teachers with whom she worked.

While working in Clear Lake, she met her future husband, Rob. After their marriage, they welcomed two boys to their family:  Kenny, 12; and Isaiah, 11. After they moved to Austin, Rob landed a job with Austin Utilities. Along the way, she earned her master’s degree.

Cabeen came to Austin to become special education coordinator at Ellis Middle School and Austin High School. She loved working with then-Principal Katie Berglund, she said. She not only was able to get her school administrative feet wet, she was able to work with special needs kids.

“It was a great opportunity, one that I really enjoyed,” she said. “It was really neat coming to a community like Austin — the commitment its people had to kids was incredible.”

Her decision to leave Ellis came with the opportunity to be a principal at Woodson in 2011.

She was referring to son Isaiah, who is from Ethiopia. That year marked his first schooling — and he knew no English at that time. Today, he is in honors math.

“He is a rock star,” she said proudly.

She didn’t feel like a star when she first took over the Woodson job, however.

“I did not know how to lead at the elementary level,” she said. “I thought, ‘This should be easy. Uh — no,’” she said. She found setting development expectations was more difficult than she had anticipated. How do you expect the best when the best is so hard to evaluate at that age?

“I also didn’t realize the importance of play,” she said. This story and more can be found in the January-February edition of Austin Living magazine. However, if you’ve read it all, never fear. We are just a short time away from wrapping up the March-April edition which will be available the end of February.

Her teachers, as it turned out, were her teachers — a move by staff that helped Cabeen understand a number of things about kindergartners. For instance, she came to realize that play-based education actually spurred creativity and critical thinking skills.

But as importantly, she found that at Woodson, “we are family.”

“I found you can’t segregate the program from the person,” she said. She recalled with a chuckle when a couple of her staff cornered her in her office, almost demanding that she go home. They knew, Cabeen added, how easy it was for educators to become so committed they did not take time for themselves and their families.

She also found she had been used to working with smaller groups — and now, she had 400 charges to watch after. Cabeen makes no bones about the fact that her teachers quickly became her partners.

And, she learned. Early on she decided that PBIS – Positive Behavioral Interventions and Supports – was a program she wanted to embrace and training got underway for herself and staff. In simple terms, it is a way to teach students about how you expect them to behave. The earlier you can help instill the need for responsibility and respect, the educational journey — and life journey — improves.

Woodson is a happy place, she said, “a safe and caring environment — but  we’re also high on student achievement.” She said many hours have been spent with a savvy staff about ways to make their students the best they can be. Cabeen makes sure learning goals and student growth data are posted for all to see. She always had her eye on providing technological opportunities for students and staff in the primary years, and creating and implementing a successful year-long district wellness initiative that partnered with community agencies and businesses. Her Reading Buddies initiative with Hormel Foods is a highlight of the school year.

Cabeen, said teacher Ellie Verdoorn “is a creative leader who is always motivated to bring new ideas and initiatives into the Kindergarten Center; Jessica recognizes and appreciates the special qualities that each staff member brings to the students.

“She helps us all make learning fun — which is the best way to learn.” First and foremost at the center of her passion for education are the students she educates. Eric Johnson/Austin Living

Cabeen has also part of a leadership circle of educators in Minnesota. She facilitates the Minnesota P3 Principal Leadership series as well the Principal Academy through the University of Minnesota. Earlier this year, she spoke fervently at a podium shared by Gov. Mark Dayton, about the need for four-year-old preschool and funding for early childhood education.

She was also named the 2017 National Distinguished Principal  for Minnesota, “a wonderful honor,” she said. The program recognizes and celebrates elementary and middle school principals who set high standards for instruction, student achievement, character and climate for students, families and staff in their learning communities. She accepted the award during ceremonies in Washington, D.C.

In true Cabeen fashion, she involved all her kids in the celebration. During an assembly, students and staff all worked to decide what kinds of things she should pack in her suitcase for the trip.

After all, that’s what your family does.