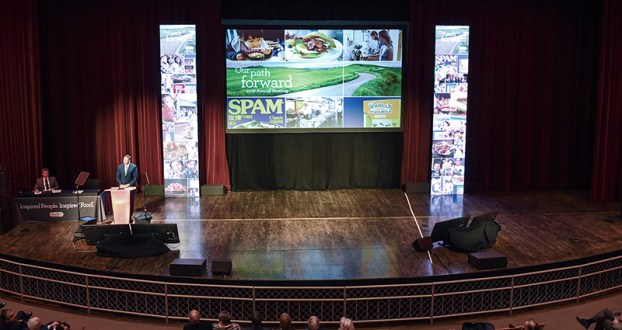 Hormel Foods Corp. CEO Jim Snee said he couldn’t be more proud of his employees and the way the company performed in 2017. 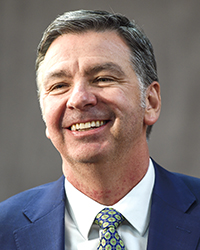 “Hormel Foods isn’t just any company,” Snee told shareholders during their annual meeting at Austin High School on Tuesday. “We are one of the most successful food companies in the world” thanks to employees who work hard, have vision and challenge the status quo.

“Inspired people creating inspired foods” continues to be a resonating mantra for the company.

Many of those employees and retired workers came to the meeting; both Knowlton Auditorium and Ove Bergen gym held overflow crowds.

There was lots to talk about. In a talk entitled “The Path Forward,” Snee said that 2017 marked the second-most profitable year for the company, with three of its five segments enjoying record earnings and sales growth. Grocery products had “a banner year,” said Snee, and was led by Wholly Guacamole dips, Spam. and Herdez salsas. An ever-expanding refrigerated foods segment is working with restaurants, hospitals and other institutions and is finding a growing market for the company’s pre-sliced and pre-cooked foods. And, the company continues to expand its international footprint, he said.

Snee outlined a strategic plan for 2018, which included a broadening of the company’s understanding of its customers, and offering healthier, on-the-go food products to reflect today’s busy consumer.

Expanding and accelerating its food service business will continue, along with the Bacon 1 product line. The need to be more global, he said, will be “filled with immense opportunity.”  Last year, the company purchased Fontanini Italian Meats and Sausages, a valuable addition to its food service segment.

The company’s global presence – today at only 6 percent of the company’s sales – is still promising a bright future.

The construction of its China plant for Spam production and its acquisition of the Ceratti line of meats provides “a strategic foothold” in international markets.

“From China to South America, we’re committed to expanding our international footprint,” he said.

Snee also outlined the many awards earned by the company,  among them was being one of the best companies for veterans, its environmental work, and recognizing “an obligation that good food is available to everybody; we understand the responsibility that comes with our responsibility in the global community.”

Other news included a new Skippy commercial, which aired for the first time at the meeting.

Snee also paid tribute to three teams of employees who won company awards in the areas of innovation, process and sustainability.

The eighth annual Paint the Town Pink cancer research benefit will continue this weekend, and residents of Austin and the... read more