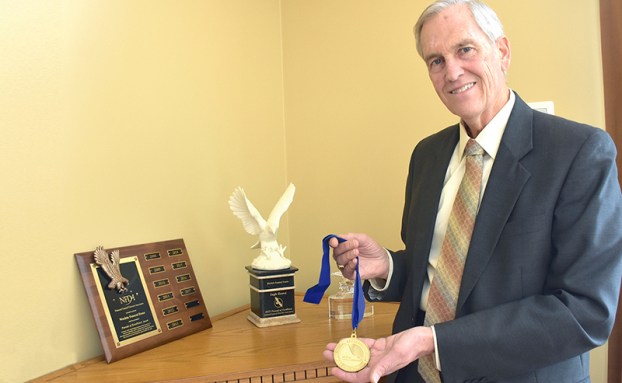 Worlein Funeral Home has once again earned the Pursuit of Excellence Award from the National Funeral Directors Association — an accomplishment that resulted in the home being inducted into the NFDA’s Hall of Excellence.

Only 165 funeral homes in the world earned the 2017 Pursuit of Excellence Award; once a home earns the award for the 10th time, they are welcomed into the Hall of Excellence.

“We’re trying to do as many things as we can to help families before, during and after a funeral,” he said.

The Pursuit of Excellence Award is given to a funeral home that meets or exceeds business standards set forth by the program and demonstrates proficiency in key areas of funeral service.

The funeral home annually adopts a major community project. This year, it was Coats of Caring that was a spinoff from the grief support group that Worlein organizes. Families of those who had passed brought in winter coats that now could be of use to others. The project was coordinated with The Salvation Army.

Past projects have included the “Empty Chair,” a special chair honoring military service upon the death of a veteran. Special pillows signifying a branch of the service is placed on the chair.

Just some of the projects in the past have included the installation of a a Little Library — which was highlighted on the cover of American Funeral Director magazine; the distribution of hundreds of bottles of hand sanitizer to public health and clinics; offering a free bus ride to Fort Snelling for veterans families; and the creation of a memorial ladder, used at funerals of those who served as firefighters, which was outfitted with the boots, hats and coat of the deceased. The home carries ladders honoring department members from Lyle, Blooming Prairie, Dexter, Austin and Brownsdale. Another project included the creation of small teddy bears for young children attending services.

Worlein has also done many things to provide for families, from preplanning grief support to aftercare.

Staff planned the creation of the video “Embracing Grief,” which helps families through the funeral process. The video can be accessed on the funeral home’s website.

The funeral home staff have also been active in providing grief support during sessions at the Mower County Senior Center.

Aftercare, called “Continuing Care,” is headed by Mary Kittelson, community services director. She will meet with a survivor who might need help processing their grief in the days following the death and funeral of a loved one.

The funeral home also provides tours, preplanning classes, and regularly speaks to church groups and civic organizations when called up. Staff works with hospice and supports several community efforts, such as Mower County Relay for Life.

Surely nobody in the Mower County Senior Center dining room would have ever thought Dagwood — the frenetic husband in... read more