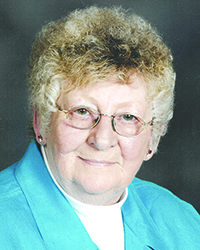 Virginia Ellen was born April 17, 1933, in Tenstrike, Minnesota, to Richard L. and Mayme M. (Konklin) Hovey. Virginia was a graduate of Bemidji High School. In 1951, she was united in marriage to Leo Tamke in Bemidji, Minnesota, and added to this union were her loving sons, Dennis, Gary, and Mark. Virginia and Leo later divorced. In 1963, she married Rodney Smith in Cedar Rapids, Iowa, and to this union were added her loving sons Keith, Dwight, Duane, and Scott. In 1966 the family moved to Lyle, Minnesota, before eventually settling in Austin. Over the years she was employed at Warehouse Market in Austin and later the Mower County Jail. Virginia started out as a cook at the jail and worked her way up to become the first female civilian jailor in Mower County before retiring in 1999. Virginia enjoyed playing bingo, cooking and baking, eating out with friends and attending a good chicken fry at the various service clubs in the Austin area. She was a member of the Lansing United Methodist Church and at the center of her life was the love she had for her sons, grandchildren, and great-grandchildren.

Funeral services will be held at 11 a.m. on Friday, Jan. 26, 2018, at First United Methodist Church in Austin with the Rev. Sheri Mason officiating. Visitation will be held from 10-11 a.m. on Friday morning prior to the service at First United Methodist Church. Interment will be in the Sunset Rest Cemetery in Northwood, Iowa. Worlein Funeral Home of Austin is assisting the family with arrangements. Condolences may be expressed to the family online at www.worlein.com.