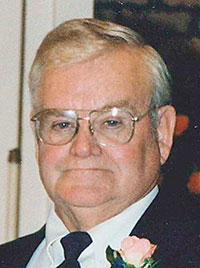 Vince was born on Feb. 27, 1931, in East Chain Township, Martin County, Minnesota, to Lawrence and Sara (Ficken) Adams. He attended school in Martin County and, at an early age, started working for some of the local farmers to help support his family. He was drafted in the U.S. Army in 1950 and served until 1953. He worked most of his life as a farm hand and later was the maintenance man at the Rose Haven Apartments in Rose Creek, Minnesota. He married Shirley Fett on Nov. 28, 1998, at the Deer Creek Valley Lutheran Church.

He enjoyed spending time with his family and getting visits from the grandchildren and great-grandchildren. He was known to give the great-grandchildren a dollar every time he saw them. He loved working outside, especially with flowers, plants, mowing and planting trees. Later in life, he enjoyed spending his summers at Pathfinder Village in Hinckley, Minnesota. He liked to start everyday with a breakfast date with his “Honey” to either the Sterling Café or Perkins. He was a member of the Lyle American Legion and Deer Creek Valley Lutheran Church, rural Glenville.