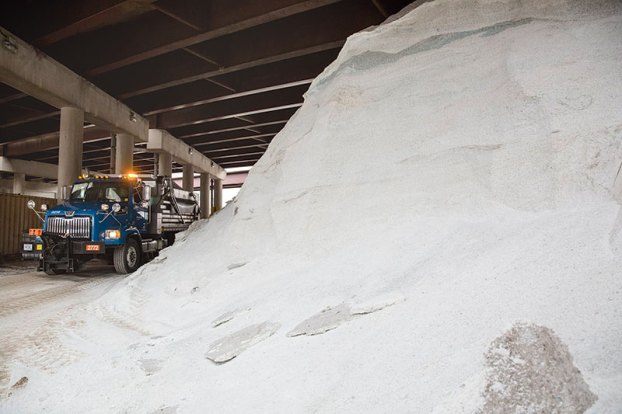 A snow plow drives past a salt pile underneath an overpass after being filled up in Minneapolis on Mon. Dec. 11, 2017. Evan Frost/MPR News

A study out this week shows that rivers in the upper Midwest — particularly North Dakota — are becoming saltier faster than the rest of the country.

The lead researcher on the study, Sujay Kaushal, an associate professor of geology at the University of Maryland, looked at five decades of data from more than 200 monitoring sites across the country.

Kaushal says the rise in salt levels doesn’t just affect aquatic life, but also human health. And because saltier water can be more corrosive, it can have costly effects on our infrastructure.

“This has implications for piped infrastructure, particularly old piped infrastructure,” Kaushal said. “For example, in the region that I live in in Washington, D.C., there was a time a couple years ago where there was an increase in manganese in our water supply. This actually affected my own home. This was because of aging, cast iron pipes that interacted with the salts and were corroded and released metals.”

Road salt is one of the biggest culprits causing rising salt levels, but it’s certainly not the only one. Kaushal says they found that when salt from fertilizers, mining, water softeners and road salt combine they form a kind of salt cocktail. And that mixture can be particularly harmful.

“Researchers are now finding that the mixture or the cocktail of salts can sometimes be more damaging to aquatic life than the single salts just by themselves,” Kaushal says.

Kaushal and his colleagues report that this salt cocktail can change the pH level of water. That’s something scientists had seen in the ocean, which is naturally salty, but not in freshwater rivers like the Mississippi. And Kaushal says a saltier water supply affects more than just taste.

Their study was published this week in the Proceedings of the National Academy of Sciences.