Pawlenty says no to bid for Franken’s US Senate seat; Ex-gov. weighing other public service options 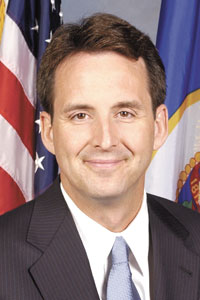 The two-term governor and 2012 presidential candidate’s name quickly surfaced after Franken announced last month that he’d resign amid sexual misconduct allegations. Pawlenty is a prolific fundraiser with deep connections after a national campaign and five years as a top banking lobbyist, and Republicans in Washington and Minnesota largely viewed the race as Pawlenty’s to turn down.

Pawlenty publicly admitted he was considering a run. But on Tuesday, he announced during an interview on Fox Business that he wouldn’t run. He noted there were only 10 months until the election in Minnesota, which he labeled “a tough state for Republicans.”

In Minnesota, Pawlenty’s decision means state Sen. Karin Housley is the only Republican in the race. Former U.S. Rep. Michele Bachmann, who also ran for the Republican presidential nomination in 2012, has also said she’s considering a campaign for the Senate seat.

The Democrat appointed by the governor to immediately replace Franken in the Senate, Sen. Tina Smith, is running for the seat in November.

Pawlenty says he was still weighing options to return to public service after leaving office in early 2011.

He is reportedly still considering another run for governor this year.

May 22-June 5 — Candidate filing period. Candidates running for partisan office need to file for office during this window of time.