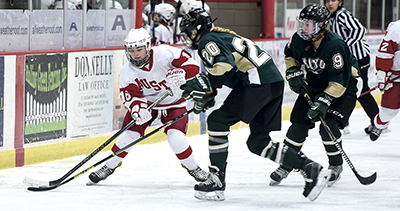 Austin’s Jaiden Schuster plays the puck under pressure along the boards during the first period Thursday night against Rochester Mayo at Riverside Arena. Eric Johnson/photodesk@austindailyherald.com

The Austin girls hockey team hung around with a one of the top teams for much of the night in the Big Nine as it lost 6-2 to Rochester Mayo in its final home game of the season in Riverside Arena Thursday.

Jordyn McCormack brought the Packers within 3-2 when she slapped in a power play goal early in the third period, but the Spartans (18-5 overall, 12-4 Big Nine) scored three goals in a 10-minute stretch to ice the game. 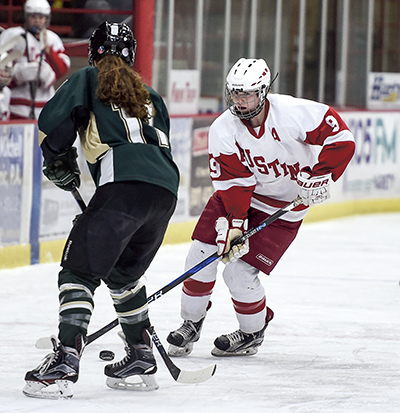 “I think when we played them the first time we were in a slump for a couple of games,” McCormack said. “Now we’re finally coming back into how we can play and we’re getting along as a team. We’re playing well together.”

Faith Sayles kept the Packers (6-14 overall, 4-11 Big Nine) in the game by making 51 saves and Myia Hoium scored a second period goal to tie the game at 1-1. It was likely the final game in Riverside for Hoium and senior Isabelle Reuter.

“It’s pretty sad knowing that they’re never going to play here again because we probably won’t get a home section game,” McCormack said. “It’s hard to get a loss, but I don’t think that shows how we played the game.”

Austin will wrap has three road games remaining in the regular season with the finale coming at Rochester Century Feb. 3 at 1 p.m. The Section 1A girls hockey tournament will begin Feb. 7.

“If we keep our heads in the game and we keep practicing hard we can finish the season strong,” McCormack said. 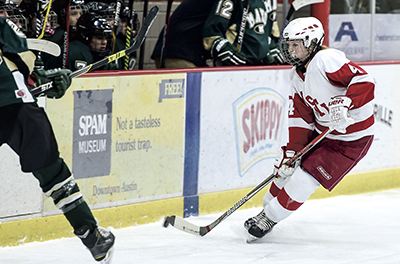 Austin’s Erin Bickler tries to head the puck off along the boards during the first half against Rochester Mayo at Riverside Arena. Eric Johnson/photodesk@austindailyherald.com 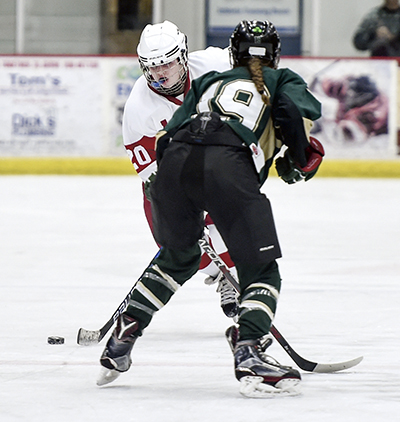 The Riverland Community College women’s basketball team was close the getting its first conference win, but it ended up losing... read more