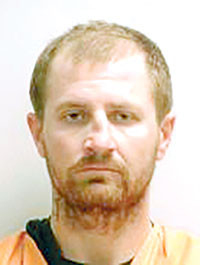 According to the court complaint, police responded to a domestic call at 3:43 p.m. on Friday in the 600 block of First Avenue Northwest. They spoke to a woman sitting in a vehicle in front of the residence who claimed Lewis was acting “strange” and that he came at her with a hammer raised in his hand. She said she went to her car because she was afraid and called the police. She also said Lewis went to the back door and was hitting it with a hammer.

Lewis told police that when he came home, all of the doors were locked and the woman would not let him in, according to the complaint.

He said he beat the hammer on the back door because he was trying to get in, but denied threatening her with it. He allegedly told police she was in her car the whole time, then told them she was not in her car when he got home.

Lewis was arrested and brought to the Mower County Jail, where he allegedly told an officer to cut him “some slack” and reduce the charges to disorderly conduct, according to the report. He allegedly told the officer he had a history of domestic violence and had just gotten off probation.

Lewis has prior convictions for assault.

Lewis will appear in court again on Jan. 29.

Pawlenty says no to bid for Franken’s US Senate seat; Ex-gov. weighing other public service options