Injured students are back home; Austin company to clean up and make repairs

LYLE — The three high school students injured Tuesday when a semitrailer crashed into Lyle Public School are home and recovering. One even made an appearance at the school on Thursday in what was an emotional reunion.

Classes resumed on Friday after a quick response from first responders, construction personnel and the district’s insurance provider. The sixth-grade and art classrooms severely damaged by the crash are sealed up so reconstruction can begin. An exterior door is installed so construction workers do not need to pass through the school to work.

Classes have been reshuffled in the school and the pair of damaged classrooms will not be used until next school year. Repairs are expected to be done before then, however.

That was the status of Lyle Public School on Friday morning, according to its administrative team.

On Tuesday morning about 8:20 a.m., a 2009 Peterbilt semitrailer driven by Jeffrey Mark Kohls, 52, of Plato, Minnesota, rear-ended a sedan on Highway 218. The semitrailer then traveled through the highway ditch, missed a tree and struck the school, according to the Minnesota State Patrol.

No charges have been filed. Kohls has more than 15 misdemeanor level traffic convictions in Minnesota, including multiple speeding violations, failure to yield and failure to stop at a stop sign. 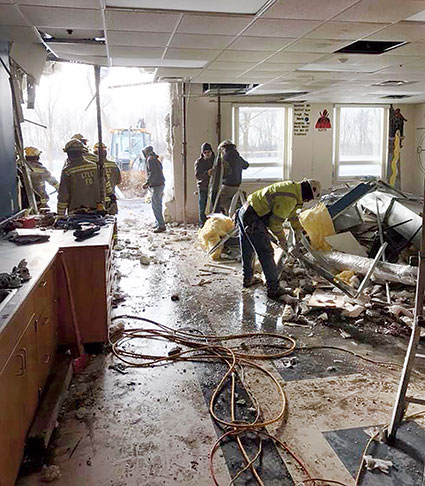 Lyle Superintendent Bryan Boysen on Tuesday posted this photo of the aftermath of a semitrailer crashing into Lyle Public School earlier in the day. “I am so thankful for the staff and first responders that helped save lives,”” he wrote. “I saw Love, compassion, dedication and countless other talents on display today.”

A high school art class was in session in the art room where the entire cab of the semitrailer penetrated, injuring two students. The third student injured was in the sedan that was rear-ended.

It could have been worse.

“(The art room) wasn’t filled because some of the kids were taking a test in a different classroom,” said Jamie Goebel, 7-12th grade principal.

The school’s administrators could not thank the students, teachers, parents and responders enough.

“We’ve said a lot of thanks,” said Goebel

He and Bryan Boysen, superintendent and elementary principal, each have children attending the school as well.

Goebel added teacher and staff training and skills shone at a time when they were most needed.

“The students … especially the older students who were there to help students get out of the building, they stepped up.”

Older students assisted staff evacuate the younger students and to care for them at the church.

Goebel’s fifth-grade daughter was in the classroom adjacent to the damaged sixth-grade room. He is deeply grateful for how an older student leaped to action to help the teacher get the children to safety. He saw it on video afterward, as he was in the art room seconds after the crash helping there.

“She essentially doubled her age for those 10 minutes,” Goebel said.

“We cannot thank the students enough for what they did. They did a fabulous job,” he said. 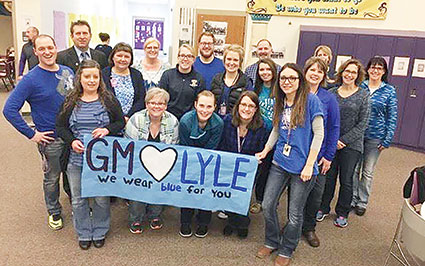 The effects of the crash have become more clear, including whether diesel fuel leaked into the building.

“It was first believed it was diesel fuel,” Goebel said. “It was not. What it was, there was some oil that got mixed in with the water, but the more water that came out of the sprinkler system the more diluted it got.”

Although the fire alarm went off in the school, the sprinkler system did not engage in the entire building. Damage from water flooding out of the crash site encompassed at least five classrooms.

(“The semitrailer) hit the pipe and that really is what set off the fire alarms,” Goebel said. Water simply poured out from the broken pipe.

The smoke that billowed into the school was “just from the steam” from water spraying on the truck, he said. He didn’t know if the truck was still on sending exhaust in as well.

The Joseph Company responded quickly to Boysen’s call on Tuesday and had the semitrailer cab-sized hole sealed off with plywood by 5 p.m that day, the superintendent said.

Boysen called the company immediately after the students were out of the building and safe. His thought at the time was: “We need to get this place safe and ready to go,” he said. “Because, in my opinion, the faster we get kids back to learning the better.”

It was about getting back to class, but it was also about normalcy and mental health.

Social workers and the school psychologist were available Friday to help with that.

“We have the proper staff here to address any children that need someone to talk to,” Boysen said. “Because a lot of homes and families don’t have those resources, they can’t afford those resources so we can provide those here and we will and we are.”

The Joseph Company is working on cleanup, before moving to reconstruction.

“They’ll be in the process of rebuilding the wall, putting everything back in place in the next few weeks,” Goebel said. “Our plan right now is, most likely, that room will not be used until September … At this point,nwe don’t see the need of bringing it back (this school year).”

Those rooms will be part of the school community’s healing process, he said.

“To a lot of students and staff those two doors will always be at the back of our mind,” he said. “Whenever it’s finished, that will be part of the recovery process for all of this.”

The three students injured and hospitalized Tuesday are home, Goebel and Boysen confirmed.

One of the students returned Thursday and surprised the staff.

“We had a spot from 1 to 4 (p.m.) yesterday where parents could come and get (students’) stuff,” Goebel said. “She stopped by towards the end of that. It was a very neat surprise for all of the staff to see her.”

She came in with a smile on her face, he said. And there were some tears within the reunion, he confirmed.

People are responding to the incident in a variety of ways, according to Goebel.

School staff met Thursday with some of the first responders and talked about the incident, getting answers to some questions.

“That was part of the healing process,” Goebel said.

The shuffling of the classrooms was also on Thursday. The sixth grade was moved to the computer lab and the art room was moved to another location that normally was the health room which only is used a few hours a day. Health classes will shift to other rooms, Goebel said.

The district’s insurance company dispatched an adjuster and engineer this week and determined the school building is structurally sound, Goebel said.

What matters more than a good QB in these playoffs? A good D

Four of the five teams that gave up the fewest points during the regular season are the last four left... read more