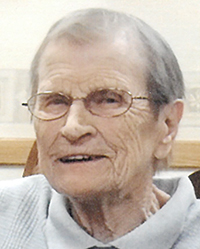 Loreen Genevieve Kilgore, 89, of Austin, Minnesota, passed away peacefully surrounded by her loving family on Wednesday, Jan. 3, 2018, at Our House Memory Care in Austin.

Loreen was born Sept. 3, 1928, in rural Lyle, Minnesota, to Herman and Selma (Nelson) Austinson. She grew up and attended school in Lyle. On Aug. 16, 1947, Loreen was united in marriage to Harlan Ed Kilgore in Mona, Iowa. The couple raised two children. In 1969, the Kilgore’s moved to Austin. Harlan passed away in 1972. Loreen enjoyed her role as wife, mother, and homemaker. She was a lifetime member of the V.F.W. and was an avid bowler and golfer. Loreen loved spending time with her family, grandchildren, and great-grandchildren. She will be dearly missed by all who knew and loved her.

Funeral services will be held at 11 a.m. on Saturday, Jan. 6, 2018, at Worlein Funeral Home Chapel in Austin. Visitation will be held for one hour prior to the service. Interment will be in Six Mile Grove in Lyle at a later date. Memorials can be directed to recipient of donor’s choice. Worlein Funeral Home of Austin is assisting the family with arrangements. Condolences may be expressed to the family online at www.worlein.com.