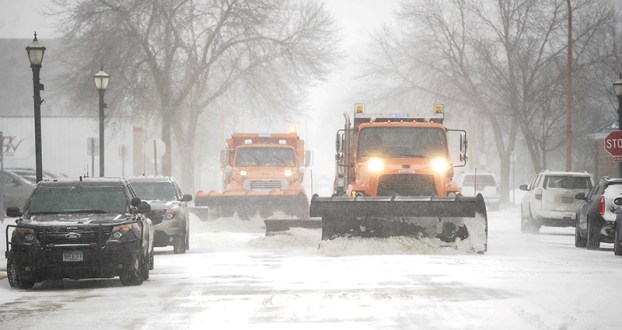 Apparently, Thursday was a good day for ping pong at Riverland Community College.

On a day when K-12 school districts throughout Mower County closed, Austin’s college campus was still active. The Multicultural Club hosted its Welcome Diversity! Day in the East Building cafeteria. Club members served up food traditional to different cultures and had a ping pong tournament.

The college’s bookstore also was open and sticking to a deadline for charging books to student accounts.

The winter storm that began with drizzle in the early morning hours Thursday, did not produce the 4-7 inches of snow possible, and despite icy and snow-covered roads, few problems arose in Austin.

Mower County Law Enforcement dispatch had nothing to report in terms of crashes — not even any vehicles sliding into ditches — between 5 a.m. and 4 p.m.

County Coordinator Craig Oscarson said he hadn’t heard of any problems related to the county snowplow operations or had any complaints. With the light amount of snow to deal with, the focus is on getting intersections and key areas sanded.

Going into the evening and by extension today, cold and blowing snow became the prime dangers.

“Very cold wind chills expected,” the advisory for northeast Iowa and southeast Minnesota said. “Plan on slippery road conditions … In addition, areas of poor visibility are expected. Additional snow accumulations of up to one inch are expected. Expect wind chills to fall to 15 below zero to 25 below zero.

“Winds gusting as high as 35 mph will cause areas of blowing and drifting snow. The cold wind chills will cause frostbite in as little as 30 minutes to exposed skin.

Don’t mess with the 70K-pound behemoth

It’s a warning worth repeating: Stay back and be patient around snowplows. Your car, SUV or big powerful pickup is... read more